Ronald Inglehart has recently published an article in Foreign Affairs called “Giving up on God: the global decline of religion” in which he uses data from the most recent wave of the World Health Surveys (WVS) to claim that between 2007 and 2019, the importance of religion has declined in most countries [1]. This is based on a single question on the importance of God in the respondent’s life on a 10-point scale. The average importance declined in 39 countries and increased in only 5.  Apart from the fact that this is based only on a single question on the importance of God, it also does not tell us how regional or global average ratings have changed. Depending on the relative populations and scale shifts in different countries, it could potentially even be consistent with a global average increase.

I’ve taken a closer look at trends in religious belief and practice using data from the World Values Survey and European Values Study [2-5] which have interviewed over 630,000 people in 110 countries in seven waves of the surveys over the period 1981 to 2020. These surveys include a direct question on whether you believe in God (Yes/No/Don’t know), but also “Are you a religious person” (Religious, Non-religious, Confirmed Atheist) and questions on frequency and type of religious practices, and on the importance in your life of religion and God. Of the 105 countries, 76 have data for years in range 2017-2020, and another 17 have data on or later than 2010.

I used these questions to define four categories of “religiosity” as follows:

Atheist: A “confirmed atheist” and/or does not believe in God

Non-religious: A non-religious person who believes in God, but rates the importance of God as 8-10 at the not important end of a 10-point scale.

Modified versions of these definitions are used for persons stating affiliation to a non-theist religion and for the predominantly Buddhist countries. A more detailed explanation of these definitions and the survey questions used, as well as details of the analysis, is available here and here. Note that my definition of religiosity is based on belief in God (or engagement with nontheist religious teachings) and degree of engagement with religious practice, not on a stated religious affiliation or type of affiliation, or on the types of belief (such as degree of fundamentalism, degree of tolerance or bigotry etc).

Country-level trends in religiosity and atheism

The following plots show trends in the prevalence of the four religiosity categories from 1980 to 2020 for six representative countries from different religious/culture zones. High income countries in Western Europe and North America are characterized by declining religiosity and rising prevalence of atheism. Former Communist countries of Europe are characterized by a drop in atheism after the breakup of the Soviet Union, some rise in the practicing religious and a much larger rise in the non-practicing religious. The vast majority of people in Africa and Islamic countries are religious, though substantial proportions are non-practicing, and the prevalence of stated irreligion (non-religious and atheists) is very low.

In his article, Inglehart notes that the USA has had the sharpest decline in the importance of God of all the countries in the WVS, and now ranks as the 11th most irreligious country (based on the single question he analysed). The graph for the USA also shows a very substantial rise in the prevalences of atheism and non-religious across the last two waves, and a corresponding decline in non-practicing and practicing religious prevalences.  If I exclude China and South Korea due to the difficulties in classifying religiosity in countries with historically important non-theistic religions, then the USA has the 3rd highest rate of decline after Chile and Denmark, but these countries all share a very similar rate of decline over the last decade around 3.5% per year.

Based on my projections of atheism prevalence to 2020 for all the WVS/EVS countries, the leading 31 countries are listed in the following table. Note that the prevalence of atheism is now higher in the USA than in Russia. The prevalence of “non-religious” has also been rising fast in the USA, now around 10% compared to between 1 and 5% in other developed countries.

China has the largest prevalence of atheism in the world at an estimated 78% but as the plot shows there has been a substantial shift from the non-religious category to the atheist category and it is difficult to interpret this given the lack of fit of the WVS questions with the non-theist religions that are most common in China.

Many of the reports of prevalence of atheism add the Non-religious to Confirmed Atheist, but the data shows that a majority of the non-religious believe in God but are estranged from institutional religion. Other reports use data on those who report “None” when asked their religion, but these also include many people who believe in God but have rejected institutional religion.

Most of the countries of Western Europe, excluding Portugal and Italy, as well as Australia, Canada, and New Zealand have more people who are non-religious or atheist than religious people. There is considerable cultural variability in the willingness of people to label themselves atheist, even if effectively they do not believe in god or consider god irrelevant to their life. The USA is an outlier with high prevalence of “non-religious” compared to other high income countries with a European heritage, and this may reflect unwillingness to use the label “atheist” due to the stigma associated with it in the USA.

Religiosity in Iran and other Islamic countries

Iran and other Islamic countries generally report very low levels of atheism, 2.4% on average, and I suspect this is lower than reality because of the quite severe social and legal consequences in many Islamic countries. The WVS uses telephone interviews and its quite likely irreligious respondents would be fearful of being identified if they respond honestly to a telephone interview. A recent internet survey provides some support for this concern. The internet-based survey collected responses from 40,000 Iranians living in Iran in June 2020 [6]. Respondents took part in the survey anonymously, and would have felt safer to express their real opinions than in telephone surveys or surveys conducted at respondents’ residence. According to this survey, only 40% of Iranians identify as Muslims (quite similar to the 43% if Iranians who are practicing Muslims according to the WVS), 8% as Zoroastrian and 9% as atheist (12% if those who identify as humanist are included). Around 20% said that they did not believe in God. This contrasts with the WVS, where 96% state they are Muslim (43% practicing, 53% non-practicing) and only 1.5% say they do not believe in God. %. Its quite likely that real levels of irreligion are higher in many other Islamic countries than the WVS survey data suggest.

Global trends in religiosity and atheism

At global level, the proportion of people who are religious and practicing has barely changed over the last 40 years, as has the prevalence of atheism, but there has been a shift from non-religious to non-practicing religious, reflecting mainly the change in former Soviet bloc countries.  Excluding China, there is a slight decline in the prevalence of atheism but overall, there has been relatively little change in prevalence of religiosity at global level over the last 40 years. This conceals quite substantial changes in developed countries and in former Soviet countries, in opposing directions.

Trends in average religiosity over the last 40 years

It is entirely possible that while the prevalences of religiosity categories have changed little, the average religiosity within categories has changed, for example through less frequent religious observance, or lesser importance placed on God in the respondent’s life (as used by Inglehart for his claim that religion is in global decline). To examine this, I used the set of religiosity variables in the WVS/EVS to compute a continuous latent variable for religiosity using an item response analysis of the relevant survey variables measuring aspects of religiosity (see here for details).

The following plot shows population-weighted trends in average religiosity from 1980 to 2020 for 10 culture zones and the world. Note that negative values indicate higher levels of religiosity and positive values indicate higher levels of irreligion. The large increase in irreligion in North America stands out, as does the more steady increase in the Reformed West, and the decrease in irreligion following the collapse of the Soviet Union and other Eastern Bloc countries around 1991. However, the continuous latent variable also picks up an increase in religiosity in Sub-Saharan Africa and an decrease in religiosity post-2000 in Latin America, the Old West and the Returned West. At global level there has been a slight increase in religiosity over the forty year period. This is the opposite conclusion to that reached by Inglehart in his recent Foreign Affairs article. 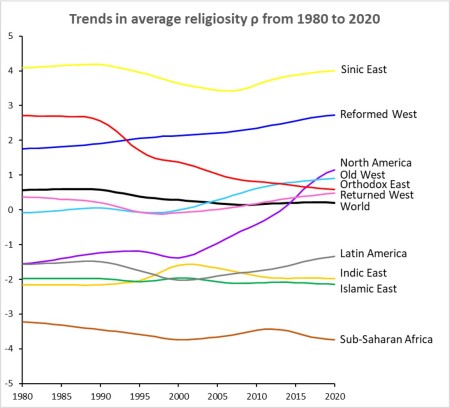 The country groups used in this plot are based on the 10 culture defined by Welzel [7] and used in my previous post, with one modification. Because Australia’s and New Zealand’s culture values are much closer to the countries of the Reformed West than to those of the USA and Canada, I have included Australia and New Zealand in the Reformed West (European countries strongly affected by the Reformation) and renamed the New West as North America. The Old West includes the mostly Catholic countries of Western Europe, the Returned West those former Soviet bloc countries who have joined the EU, and the Orthodox East includes the Christian Orthodox or Islamic parts of the former Soviet bloc countries.

Why is religion on the decline in the Reformed West, Old West and North America? Not coincidentally, these countries are essentially those in which the scientific and industrial revolutions of the last three centuries first occurred. In my view, a key reason for this was the utter revulsion intelligent people developed for absolutist religious and political institutions which regulated beliefs and speech and resulted in centuries of wars in Europe. Europeans rejected the idea that the King or Pope or Bishop could order them what to believe and think on pain of death. Freedom of thought was a crucial factor in the development of science, which underpins the technological revolution. Widespread education, improving standards of living, and the evident benefits of scientific knowledge have all resulted in fewer and fewer people continuing to hold to fundamentalist (ie Bronze Age) understandings of religion. And religious extremists are reacting to this. Just two days ago, a French teacher discussing freedom of thought with his class was beheaded by a Muslim student offended by his use of cartoons to illustrate freedom of thought.

To be clear, science and modern values are not at all incompatible in principle with spirituality, but are definitely incompatible with forms of religion that define their truths as being absolute and beyond question.

3 thoughts on “Is religious belief in decline and atheism on the rise?”