I recently had an opportunity to spend a weekend exploring Neolithic, Bronze Age and Iron Age sites on the Wessex Downs. Britain’s “oldest road”, the Ridgeway, runs 87 miles (137 kilometres) across the Wessex Downs eastward to the Berkshire Downs and the River Thames. It has been in use for over 5,000 years and I briefly visited it over 30 years ago. 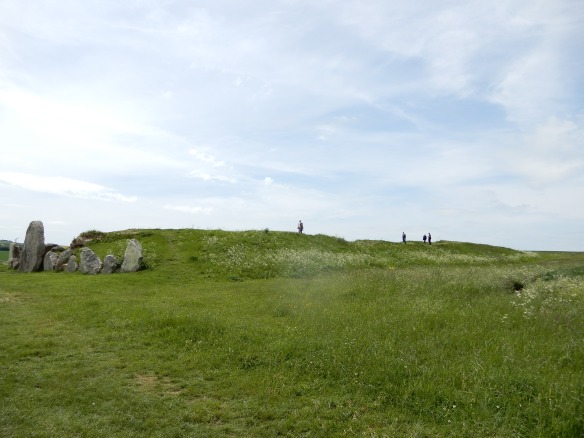 At the western end of the Ridgeway, a couple of miles from Avebury, I visited West Kennet Long Barrow which was built during the early Neolithic period around 3,650 BC. There are five stone burial chambers in the eastern end, and at least 46 people were buried here over a 1,000 year period. The entrance consists of a concave forecourt with a facade made from large slabs of sarsen stones which were placed to seal entry towards the end of its life.

Large sarsen stones guard the entrance to the Barrow

Dry stone walling of oolitic limestone has been used to fill the gaps between the large sarsen stones. Such limestone does not occur locally and must have been transported from the Cotswold hills some 20-30 miles away. The burial mound is 100 metres in length and sits on a prominent chalk ridge about a kilometre south of Silbury Hill. In total, it is estimated that 15,700 man-hours were expended in its construction.

The early Neolithic period was a revolutionary period in British history when agriculture was widely adopted as the primary form of subsistence, replacing the previous hunter-gatherer lifestyle.  One of my maternal line ancestors, Urwen, lived around the period that the West Kennet Long Barrow was constructed, and may even have lived in this area. I have written about my maternal line ancestors in a previous post, in which I estimated that Urwen was my great*292nd grandmother (maternal-ancestors-ice-age-europe-and-britain).

Inside the burial chambers

Clearly visible about 1 km away is Silbury Hill, built around 2,400 BC at the beginning of the Bronze age. This dates it over 1,200 years later than West Kennet Long Barrow. Silbury Hill the largest and tallest prehistoric  structure in Europe, standing about 30 metres high and 160 metres wide.

Comparable in size to some of the smaller Egyptian pyramids, it was built at around the same time. No burial chamber has ever been found inside and its purpose remains a mystery. It is estimated to have involved about 4 million man hours of work over a period of between 150 and 400 years (based on radiocarbon dating [1]), and clearly involved a massive and sustained communal effort over many generations.

Another view of Silbury Hill from the other side

About 1 mile east of West Kennet Long Barrow on Overton Hill lies a Bronze Age barrow cemetery known as the Sanctuary Barrows or Seven Barrows. These burial mounds are over 4,000 years old and dated to the early Bronze Age, around the same period as the construction of Silbury Hill. The barrows are recorded are far back as AD 939 in the Charter of Athelstan and by the 17th century the site was known as Seven-barrow hill, from the Anglo-Saxon ‘Seorfon Beorgas’  although the site really consists of twelve round barrows.  It is not be confused with the similarly named Seven Barrows near Lambourn in Berkshire where there is a barrow cemetery containing around 40 barrows.

The prominent mounds to the north of the A4 road mark the start of the Ridgeway and consist of the five barrows, four are examples of bell barrows, with a smaller fifth bowl barrow in between. Both burials and cremations have been found there, and these were sometimes accompanied by grave goods such as pottery and bone and flint implements. The general construction of these barrows consisted of building material up and around bodies/remains within. The barrows had secondary use by peoples of other periods spanning hundreds of years. Often, later surface burials or burials nearby were created.

Three of the Seven Barrows

About 150 north of the barrows shown in the photo above, part of the London-Bath Roman road crosses the barrow field and is clearly visible in satellite photos, although the low mounds and ditches on either side of it are not prominent on the ground, with a height of about 0.5 metres. Three of the burial mounds located right next to the Roman road have now been identified as Roman burial mounds, thought to be a unique occurrence in Britain. Perhaps the Romans were inspired here to take on the local customs?  Post-holes found on the mounds suggest that they were surrounded by a fence. Roman and post-Roman Anglo-Saxon weapons and remains were found in them [2].

Some of the Seven Barrows on Overton Hill

Across the busy A4 road from the Seven Barrows is the Sanctuary, the site of a stone circle that once formed the terminal point of the West Kennet Avenue of standing stones (see below). Large enough to contain the outer ring of stones at Stonehenge its earliest parts are dated to around 3000 BC which is about the same period as the earliest part of Stonehenge (about 20 miles away) was constructed. It is believed to have only become linked to the distant henge at Avebury when the avenue was built about 2400 BC. Although John Aubrey in 1649 recorded it as a double ring of stones in 1649, all the stones disappeared and the site was lost until rediscovered in 1930.  Excavations have revealed the locations of the stones (blue markers), and also of post holes (red markers) that were used for a timber structure. 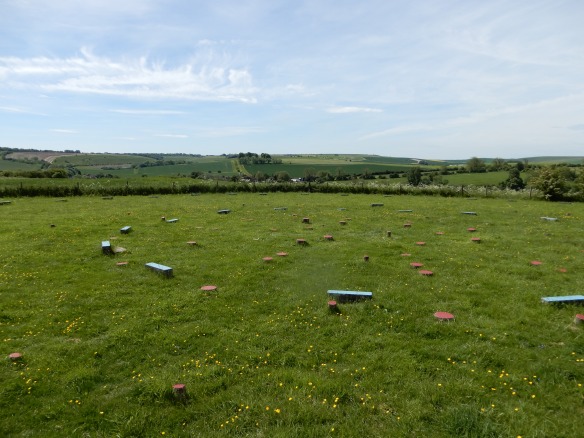 J.R.R.Tolkien Tolkien wrote The Hobbit and The Lord Of The Rings while living in Oxford, which is about 40 miles from Overton Hill, and closer to some of the other Barrow cemeteries on the Wessex Downs. Almost certainly, these Barrows were the inspiration for his Barrow Downs in the Lord of the Rings [3] where Frodo and the other hobbits encountered a malevolent barrow wight who ensnared them in a barrow.

It is said that the mounds of Tyrn Gorthad, as the Barrowdowns were called of old, are very ancient, and that many were built in the days of the old world of the First Age by the forefathers of the Edain………..Some say that the mound in which the Ring-bearer was imprisoned had been the grave of the last prince of Cardolan, who fell in the war of 1409 [4]

In the previous Chapter, Tom Bombadil gave the hobbits a description of the Barrow Downs which could very easily have been describing the North Wessex Downs and their barrows that I visited.

Suddenly Tom’s talk left the woods and went leaping up the young stream, over bubbling waterfalls, over pebbles and worn rocks, and among small flowers in close grass and wet crannies, wandering at last up on to the Downs. They heard of the Great Barrows, and the green mounds, and the stone-rings upon the hills and in the hollows among the hills. Sheep were bleating in flocks. Green walls and white walls rose. There were fortresses on the heights. Kings of little kingdoms fought together, and the young Sun shone like fire on the red metal of their new and greedy swords. There was victory and defeat; and towers fell, fortresses were burned, and flames went up into the sky. Gold was piled on the biers of dead kings and queens; and mounds covered them, and the stone doors were shut; and the grass grew over all. Sheep walked for a while biting the grass, but soon the hills were empty again. A shadow came out of dark places far away, and the bones were stirred in the mounds. Barrow-wights walked in the hollow places with a clink of rings on cold fingers, and gold chains in the wind. Stone rings grinned out of the ground like broken teeth in the moonlight. [5]

Later in the day, I spent an hour trying to locate a route to Windmill Hill, which is about 1 mile northwest of Avebury and only accessible by a hard-to-find farm track. The top of this low hill was the site of a large Neolithc enclosure formed by three concentric circles of ditches. It was built around 3,650 BC, the same time as the West Kennet Long Barrow, and was in use for about 300 years. The large mounds on the site are Bronze Age burial mounds dating from about 2,000-1,500 BC.

Approaching Windmill Hill and already inside the Neolithic ring of ditches.

The large barrow at the centre has a prominent ditch around its base.

[3] J.R.R.Tolkien. The Fellowship of the Ring. Chapter VIII. Fog on the Barrow-downs.

[4] J.R.R.Tolkien. The Return of the King. Appendix A, I, iii, Eriador, Arnor, and the Heirs of Isildur.

[5] J.R.R.Tolkien. The Fellowship of the Ring. Chapter VII. In the House of Tom Bombadil.

3 thoughts on “Exploring the Barrow Downs of Wessex”