In February 2014, I did a series of posts on my deep maternal ancestors, identified through a test of mutations on my mitochondrial DNA (mtDNA) which is inherited only from the mother. This test was carried out by Ancestry.com, who have since discontinued tests of mtDNA and Y-chromosome DNA. Costs of DNA tests have dropped dramatically since then, and late last year I ordered an mtDNA test from FamilyTreeDNA (www.familytreedna.com) which carried out a full sequencing of the mitochondrial DNA.

As well as the DNA that makes up the chromosomes in the nuclei of our cells, we also have another type of DNA called mitochondrial DNA (mtDNA). The mitochondria are organs located outside the cell nucleus which convert sugars into energy.  Mitochondria have a small circular loop of DNA, containing only approximately 16,569 base pairs in humans. The circular mtDNA is similar to the DNA of bacteria, and it is thought that mitochondia evolved from symbiotic bacteria that were once free living.

In humans, as in other higher organisms, a DNA molecule consists of two strands that wrap around each other in the well known double helix structure. Each strand contains a linear arrangement of four different bases: adenine (A), thymine (T), guanine (G), and cytosine (C).  Specific sequences of three bases make a DNA “word” which codes for an amino acid. A string of DNA “words” strung together in a sequence provides the instructions to make a particular protein. The base-pairs on the circular mtDNA loop are numbered from 1 to 16,569 and different portions of the loop have been given different names as shown in the following diagram. The first and second portions, called hypervariable control region 1 (HRV1) and hypervariable control region 2 (HRV2) are regions of the mtDNA that accumulate mutations (changes in base-pairs) relatively quickly and thus tend to be hyper-variable between people who are not closely related. The third portion, the coding region, accumulates far fewer changes and contains the base-pair sequences for mitochondrial genes [1]. 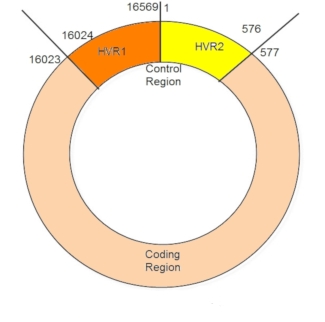 One type of mutation, called a single nucleotide polymorphism (SNP), is a single base pair in a DNA sequence that has been replaced by a different base pair. My mtDNA test results identified 68 SNPs, 13 in HRV1, 17 in HRV2, and 38 in the coding region through comparison of my base sequences with those of the Reconstructed Sapiens Reference Sequence (RSRS). The RSRS is a recent effort to reconstruct a single ancestral genome for all living humans, using both a global sampling of modern human samples and samples from ancient hominids. It was introduced in early 2012 as a replacement for the rCRS (revised Cambridge Reference Sequence).

Over a period of nearly 180,000 years, SNPs have steadily accumulated on different human mtDNA molecules being passed down from mothers to their children. SNPs thus provide a cumulative dossier of our own maternal prehistory. We can use these mutations to reconstruct a genetic tree of mtDNA, because each new SNP in a prospective mother’s ovum will be transferred in perpetuity to all her descendants down the female line.

When a group of people share similar SNPs, they are part of the same “haplogroup”. For example, over 95% of native-born Europeans fit into seven haplogroups, which in turn derive from an older haplogroup that arose in the Middle East. Other regions of the world are associated with different haplogroups. Each of these groups trace their maternal ancestry back to just one woman, the common maternal ancestor of everyone in her haplogroup, or clan. Not everyone in the same clan has exactly the same mtDNA, because DNA accumulates additional mutations gradually over the generations. However, everyone in the clan shares a set of common mutations, which are the signature of the mtDNA of their founding maternal ancestor.

It is thus possible to trace migration routes by observing the branching points in an ancestral map containing all known haplogroups (see map below). Mitochondrial DNA in humans of African origin show the most diversity in the world. This supports the concept that ancient humans first existed in Africa and stayed in Africa for thousands of years.  The humans who left Africa around 70,000 years age took two major routes, to Asia (haplogroup M) and to Europe (haplogroup N).

Migration routes of human beings dating back to 170,000 years ago. All humans originated in Africa and migrated out, branching into the two main out of Africa haplogroups, M and N. Individuals in haplogroup M headed west to Asia and later to the Americas, while haplogroup N moved into Europe.

The clan mothers were not the only people alive at the time, of course, but they were the only ones to have direct maternal descendants living right through to the present day. The other women around, or their descendants, either had no children at all or had only sons, who could not pass on their mtDNA. And, of course, the clan mothers had ancestors themselves. Everyone alive on the planet today can trace their maternal ancestry back to just one woman, the founder of haplogroup L. According to recent studies, she lived in Africa nearly 180,000 years ago and is known as “Mitochondrial Eve” (see my previous post  mitochondrial eve )

The age estimates for haplogroup founders in my 2014 posts were based on estimating average mutation rates for mtDNA SNPs, assuming an average constant mutation rate [2, 3]. There have been several more recent studies that have updated these estimates using not only samples from living humans but also analyses of mtDNA from ancient humans.

The following map summarizes the revised timeline for the migration of the ancestors of maternal haplogroup U5 out of Africa.

Ancestral migration path of maternal ancestors for haplogroup U5

In following posts, I will update the previous posts summarizing my maternal haplogroup ancestors and placing them in the context of the human expansion out of Africa and across Europe, as well as the context of the ice ages and the evolution of human cultures.