I took my younger son to see Avengers: Endgame on the big IMAX 3D screen the day after it was released. The theatre was almost full, unusual for Geneva. My older son went later in the evening, and he and his friends got the last remaining seats in row A, only two or three metres from the screen.  He claims he enjoyed it and didn’t really notice he was almost in the action.

The movie is long at three hours, but we didn’t notice the passing of time. Lots of emotional scenes, if anything a bit overdone for my taste. But still satisfying, and overall, the movie certainly wraps up the entire arc of the Avengers cycle of movies in a deeply satisfying way. There are lots of good reviews out there and I won’t try to cover the same ground. Rotten Tomatoes has quite a few critics reviews and the Tomatometer has a score of 95% and audience score of 91%. IMDB has a rating of 9 out of 10.

My two sons have been fans of the Marvel Cinematic Universe (MCU) since the first of the main films focused on the Avengers came out in 2008. There are now 21 films, including the just released Avengers: Endgame. My boys have seen all of them, and I checked and think I’ve seen 19, possibly 20.  I haven’t seen Captain Marvel yet, and one of my sons assures me it is no loss, unlike most of the others there was no arc of character development in his view.

I’ve been a fan since the release of Thor (2011), in my idiosyncratic view still the best of the MCU movies. Perhaps because it relates closely to the Northern mythology that was an early love of mine since childhood. I was quite unhappy about Avengers: Infinity War, in which Thanos snaps his fingers (the Snapture) and half the sentient beings of the universe die, including half the superheros. Though it has excellent reviews and audience reaction, I found it unsatisfying and sad. Though well made. Fortunately, most of the key Avengers survive to try to undo the damage in Avengers: Endgame. Spoilers ahead. Do not continue reading if you are still intending to see the movie. 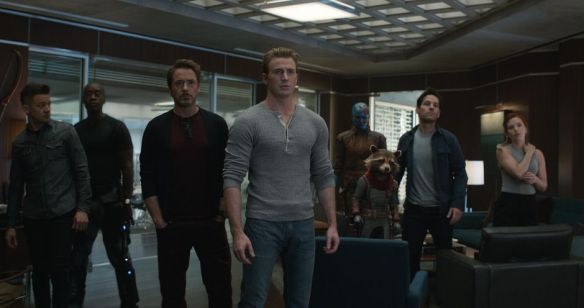 While I generally agree with the critics very positive reviews, I do have two gripes, one minor and one more important. The first is that of course the movie turns to time travel to undo Thanos’ Snapture. Given that these deaths were real deaths, experienced by the characters, there wasn’t much other choice. And although the mechanism of time travel is barely justified (Iron Man just dreams it up using his home computer to make a Mobius strip!), there is some attempt to deal with the paradoxes of time travel, as explained by the Ancient One (Tilda Swinton).  And this becomes a key factor in the plot, since all the Avengers need to return the Infinity Stones to the places/times where they took them, to prevent timelines changing. But there are a couple of contradictions towards the end of the film. Captain America goes back in time, and stays there, so there will be two Captain Americas once he is thawed again. So this will result in a different future, despite the efforts to prevent that. That said, all time travel movies inevitably end up with this type of problem, or they become so mind-bending that no-one can decide if there is a problem or not. So in the end, I’m not going to let that upset my enjoyment of the movie.

For me the more major complaint is that Thor becomes more and more a comic character. I enjoyed his developmental arc through the Thor movies from arrogant arsehole to wise hero to laid back joking hero, but this movie shows him reacting to the Snapture by becoming a self-satirising clown. And he goes off at the end of the movie to join the comic crew of Guardians of the Galaxy, since the Avengers are disbanded. Asgardians of the Galaxy?  I would prefer him to raise an expeditionary force to build a new Asgard on the same or a different planet.

However, I will dwell one review in particular, from Australia’s only radical literary magazine Overland. This review by Giovanni Tiso is entitled

I studied Beckett’s most famous play Waiting for Godot in high school, and also read his other major middle-period play, “Endgame”. Both plays deal with the subject of despair and the will to survive in spite of that despair, in the face of an uncomprehending and incomprehensible world. The words of Nell—one of the two legless characters in Endgame who are trapped in ashbins, from which they occasionally peek their heads to speak—can best summarize the themes of these plays: “Nothing is funnier than unhappiness, I grant you that. … Yes, yes, it’s the most comical thing in the world. And we laugh, we laugh, with a will, in the beginning. But it’s always the same thing. Yes, it’s like the funny story we have heard too often, we still find it funny, but we don’t laugh any more.”

Following are some extended quotations from the full review which give you a taste. I leave off the quotation marks, but it is all quotes from here on.

Samuel Becket’s strict stage directions [enforced by his estate]… make Marvel Studios’ film adaptation of Endgame all the more remarkable. The Russo Brothers have redefined what it means to ‘take liberties’ with the source material. Beckett said the play should be set in a single interior? Then we’re going to use the whole universe. He ordered that there should be only four characters? Then we’re going to use hundreds, possibly thousands of them. Oh, and about those famous lines of dialogue … we’re going to go ahead and write a completely new script. This, perhaps the most contentious decision of all, finds artistic justification in a passage of the original play: ‘I use the words you taught me. If they don’t mean anything any more, teach me others.’

Take Clov’s famous line, near the beginning of the play: ‘It’s time it ended and yet I hesitate to – (He yawns.) – to end.’ With a running time of over three hours, Marvel’s Endgame is one long hesitation to end that will have you yawning with admiration over and over again.

Another line spoken by Clov is even more exemplary of the Russo Brothers’ approach to this adaptation. ‘The world is corpsed,’ he declares while surveying the outside world from one of those high windows. In the play, it is left to audience to imagine what a ‘corpsed’ world

[As shown in the movie] it turns out that the two main elements of a corpsed world are that people no longer play baseball and have stopped picking up their rubbish. The first one is no doubt a knowing, ironic gag (Beckett wrote the play in Paris, and the French don’t play baseball even while they’re alive), and the second is clearly a reference to the characters of Nell and Nagg, the elderly couple who are spending their final days inside two garbage bins on Beckett’s stage. 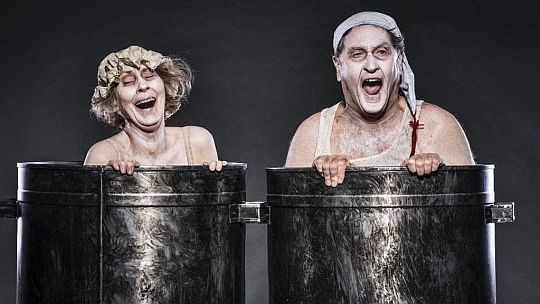 Marvel’s Endgame works precisely because it makes rich use of its source, allowing different characters to step into the shoes … of Beckett’s dramatis personae.

If I have one (minor) complaint is that this dynamic at times seems a little too literal, as the film veers paradoxically too close to the source. Perhaps the filmmakers felt the ‘dead hand’ of the playwright – deftly symbolised here by the gloved hand of Thanos – placed too firmly on their shoulder. But it’s a quibble which pales against the bold artistic achievement that is Marvel’s Endgame. In adapting the BTU (Beckett Theatrical Universe), the Russo Brothers have succeeded in doing to film what the great writer did to the theatre, calling into question the very foundations of the art.