Today the 16th June is Bloomsday, a celebration of the life and work of the Irish writer James Joyce. Joyce’s epic novel Ulysses is set on that day in 1904, the day of his first date with his wife-to-be, Nora Barnacle.

This lengthy novel has been highly controversial, and has been banned in various countries. It is written using a stream-of-consciousness technique, with careful structuring based on Homer’s Odyssey. Its revolutionary technique and experimental prose as well as its rich characterisation and broad humour, have led it to be regarded as one of the greatest literary works in history.

I read Ulysses as an undergraduate during my daily commutes by train to and from Sydney University. I was particularly taken with the final chapter of Ulysses in which Molly Bloom is lying in bed next to Leopold and her thoughts are reported as a stream-of-consciousness 42 pages in length. I think I read a paperback edition that belonged to my father. I remember him during that period quoting to me the following passage highlighting Leopold Bloom’s adoration for his wife Molly, because he loved the sound of the words: 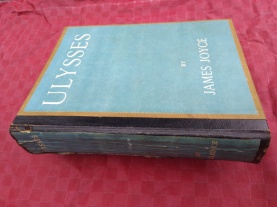 My father and before him my great-Uncle John (1895-1975) were book collectors and I have kept some of their books, including a copy of the first edition of Ulysses published by Shakespeare and Company in Paris. After the initial printing of 1000 numbered copies in 1922, my great-uncle acquired a copy in 1927 from the 8th print run of May 1926.

A publishing history of Ulysses can be found at antwerpjamesjoycecenter.com

I knew that Ulysses had been banned in Australia for some time and looked up the dates. it was not banned until 1929, then released in 1937, only to be restricted again in 1941 after pressure from Catholic organizations. This ban was lifted in 1953 after it was considered ineffectual considering how many copies were already in circulation.

Ulysses was banned in the USA until 1934, when it was deemed not to be pornographic in a court case brought by the publisher Random House. Throughout the 1920s, the United States Post Office Department burned copies of the novel. Ulysses was also banned in the United Kingdom until 1936 and in Ireland until the 1960s.

During the 20th century Australia was one of the strictest censors in the western world, often banning imported material that was considered suitable reading in England, Europe and America. A vast range of books have been banned in Australia for reasons including depictions of sex, homosexuality, violence, crime and drug use, or for “subversive” political themes. In 1935, the responsibility for banning books fell on the Department of Trade and Customs who could ban the import of any book it deemed “obscene, indecent, blasphemous and seditious, or those identified to excessively emphasize sex, violence or crime”.

In the year I was born, Ray Bradbury published the dystopian science fiction novel

Fahrenheit 451 about a future American society where books are outlawed and “firemen” burn any that are found. The title refers to the temperature at which book paper catches fire and burns. Incidentally, every few years, Fahrenheit 451 ends up on a banned book list somewhere in the United States. It’s an irony with a long history. In 1979, Bradbury himself demanded that Ballantine Books cease publication of a high school edition that censored some of the language.

At the time Bradbury wrote Fahrenheit 451, Australia had a very active regime of banning books and burning those illicit copies that it seized. Far more so than the USA, where there was some constitutional protection for free speech. In contrast, the Australian constitution has no clauses on human rights, and there is no bill of rights. Hence, there are no real legal impediments to the persecution of whistle-blowers and journalists, as is happening at increasing rates at present, or to the censorship of films and books.

Lists of banned material from the 1920s to 1970s have been compiled by Google Arts and Culture, the National Library of Australia and the University of Melbourne Library among others. I list below a selection of books that have been banned in Australia at various times; it’s an idiosyncratic selection including some famous books I am astonished to see there as well as various books I have read and, in some cases, currently own copies of. I’ve largely ignored the quite large numbers of banned erotic, romantic or crime novels by largely obscure authors, but have included some that illustrate that our government used to think Australians were too sensitive to be given information about hippy culture, birth control, or sexual practices, orientations, and psychology of sex, among other things.

Selected books that have been banned in Australia

Another set of books on the list above which my great-uncle John had in his library was The Book of The Thousand Nights and One Night translated by Dr. J.C. Mardrus and compiled by E. Powys Mathers. This was privately printed in London as a 16 volume set for subscribers of the Casanova Society in 1923 and acquired by my great uncle on 24 September 1923. It was banned in Australia from 1930 to 1938. In part, because it was compiled by a namesake, I have kept this set of books also. Such classic stories as Ali Baba and the Forty Thieves are from the 1001 Nights. As is the story of Aladdin, recently made into the second of two movies of the same title from Walt Disney. 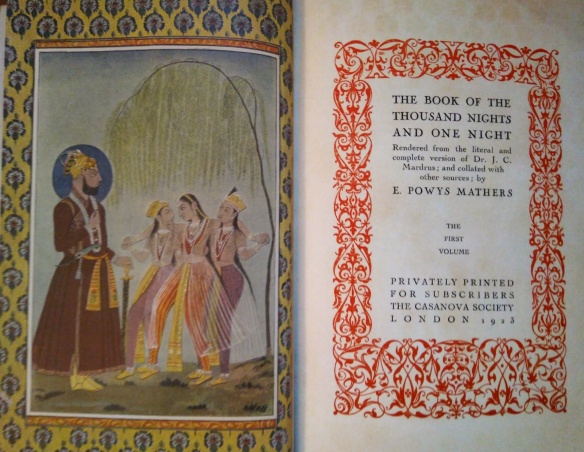 Among other banned books that my father had in his library were Frank Harris’s very explicit autobiography My Life and Loves with a focus on his many seductions of teenage girls and women, as well as other Frank Harris memoirs. I started seriously buying my own books around 1970 when I started university, and made it a habit to include a tour of the second-hand bookshops of George Street, on my return home at the end of the day. I picked up a number of books, new or second-hand in the early 1970s which, at the time, I had no idea  had been banned. These included Gore Vidal’s Myra Breckinridge, Philip Roth’s Portnoy’s complaint, Timothy Leary, Ralph Metner & Richard Alpert’s The psychedelic experience: A manual based on the Tibetan book of the dead, Gershon Legman, The limerick: 1700 examples with notes, variants and index, and Barry Humphries, The wonderful world of Barry McKenzie.

The election of the Whitlam Government in 1972 was a breath of fresh air after many years of conservative government. Among the many things his government did was an easing of censorship, particularly of books. Perhaps Gough Whitlam was particularly sensitized to this, as the then Deputy Leader of the Opposition had his copy of James Baldwin’s Another Country seized by Australian Customs in 1964. That book explored race relations in the USA in the 1950s.

One of Australia’s best known comedians, Barry Humphries, published a cartoon strip The Wonderful World of Barry McKenzie in Private Eye, which was banned by the Liberal Prime Minister John Gorton in 1968. It was Bazza McKenzie who popularized the term “technicolour yawn” for vomit, and educated me on the two main classes of vomiting: “Herg” and “Ruth”. Four years later, the film version not only received cinema release but even featured a cameo appearance from Gorton’s successor, Gough Whitlam.

Although book burning and banning are much less common in Australia these days, there is more active censorship of films, and in recent years there have been backyard screenings of banned films, with police raids and seizing of “illegal” DVDs (see theguardian.filmcensorship).  The thought police and their cheer squads remain very active and recent moves by Australian governments to persecute and suppress whistle-blowing and politically embarrassing journalism give no cause for complacency. Western Enlightenment values such as freedom of speech seem more under threat from both left and right these days than they were when I was younger.

2 thoughts on “Ulysses and book burning in Australia”