The tale of how a Scottish Mathers killed and ate one of his enemies was discovered by my father when he was reading a Scottish novel from his Uncle John’s library (John Melrose  Mathers 1889-1975). He took great delight in the idea that the medieval Scottish ancestors of the Mathers family had been cannibals.

The novel, Cloud Howe, by Lewis Grassic Gibbon was published by Jarrolds, of London, in July 1933. It was the middle novel in a trilogy A Scots Quair, the others were Sunset Song and Grey Granite.

In the Proem to Cloud Howe, Gibbon recounts the history of the village of Segget, which stands under the Mounth, on the southern side, in the Mearns Howe, near Fordoun and Drumlithie. The Mearns was the Gaelic name for Kincardineshire (from A’ Mhaoirne meaning ‘The Stewartry’). Gibbon tells how Hew Monte Alto, a Lombard with the army of Robert the Bruce, took a fancy to “the lands that lay under the Kaimes in the windy Howe” and requested them from Robert the Bruce when he became King. As Gibbon continues the story:

“These lands had been held by the Mathers folk, but they had made peace with Edward the First and given him shelter and welcome the night he halted in Mearns as he toured the north. So the Bruce he took their lands from the Mathers and gave them to Hew, that was well content, though vexed that he came of no gentle blood. So he sent a carle to the Mathers lord to ask if he had a daughter of age for wedding and bedding; and he sent an old carle that he well could spare, in case the Mathers should flay him alive.”

“For the Mathers were proud as though God had made their flesh of another manure from men; but by then they had come to a right sore pass in the mouldering old castle by Fettercairn, where hung the helmet of good King Grig, who first had ‘stablished the Mathers there, and made of the first of them Merniae Decurio, Captain-chief of the Mearns lands. So the old lord left Hew’s carle unskinned, and sent back the message he had more than one daughter, and the Lombard could come and choose which he liked. And Hew rode there and he made his choice, and was wedded and bedded to a Mathers quean.”
(Proem to Cloud Howe, by Lewis Grassic Gibbon).

Hew built a castle within the walls of the old-time Kaimes and brought weavers from Lombardy. With time the Lombards interbred with the dour, dark Pictish folk of the Mearns. When the English army returned to Scotland, Hew joined King Robert and was killed at the Battle of Bannockburn, slain by an English arrow as he rode to inspect the pits he had built to trap the English cavalry.

“So the Monte Altos came to be Mowat, and interbred with the Mathers folk, and the next of whom any story is told is he who befriended the Mathers who joined with other three lairds against the Lord Melville. For he pressed them right sore, the Sheriff of Mearns, and the four complained and complained to the King; and the King was right vexed, and he pulled at his beard ‑ Sorrow gin the Sheriff were sodden-sodden and supped in his brew! He said the words in a moment of rage, un-thinking, and then they passed from his mind; but the lairds remembered, and took horse for the Howe.”

“There, as they’d planned, the four of them did, the Sheriff went hunting with the four fierce lairds, Arbuthnott, Pitarrow, Lauriston, Mathers ; and they took him and bound him and carried him up Garvock, between two stones a great cauldron was hung; and they stripped him bare and threw him within, in the water that was just beginning to boil; and they watched while he slowly ceased to scraich, he howled like a wolf in the warming water, then like a bairn smored in plague, and his body bloated red as the clay, till the flesh loosed off from his seething bones ; and the four lairds took their horn spoons from their belts and supped the broth that the Sheriff made, and fulfilled the words that the King had said.”

“They were hunted sore by the law and the kirk, the Mathers fled to the Kaimes to hide, his kinsman Mowat closed up the gates and defied the men of the King that came. So they laid a siege to the castle of Kaimes; but the burghers of Segget sent meat to the castle by a secret way that led round the hills; and a pardon came for the Mathers at last, the army withdrew and the Mathers came out, and he swore if ever again in his life he supped of broth or lodged between walls, so might any man do to himself as he had done to the Sheriff Melville.”
(Proem to Cloud Howe, by Lewis Grassic Gibbon). 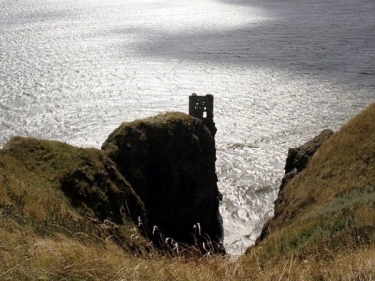 This story is based on a historical incident. The Mathers in the story is George Berclay, 5th of Mathers (d. about 1458), who became the most famous of the medieval Barclays of Mathers, when he and his uncles Patrick and John murdered Sir John Melville of Glenbervie, the arrogant and unpopular Sheriff of the Mearns, boiling him and making him into soup.

He is supposed to have built the Kaim of Mathers (see photo), to take refuge from the vengeance of King James 1 of Scotland for his part in the murder. The murder was actually carried out in a gully on the hill of Garvock, now bridged by the road from Foudoun to Johnshaven. To this day the gully is called the Sheriff’s Kettle.

The Berkeleys of Mathers (villages  on the east coast of Scotland) were the medieval lairds of the villages of  East Mathers, West Mathers and Milton of Mathers on the east coast of Scotland and may not be related to people who took their names from the village or to myself. The Scottish name Mathers may derive from this village.  In any case, I like to think that I have a cannibal ancestor.

I recently discovered another Mathers connection to cannibalism, this time in Australia. An escaped convict from Ireland,  John Mathers, was eaten by his companions after they escaped from Macquarie Harbour in 1822. The eight escapees were Thomas Bodenham, James Brown, Bill Cornelius, Alexander Dalton, Bob Greenhill, John Mathers,
Matthew Travers and Alexander Pierce. The leader, Pearce, had been deported at the age of 26 years from Ireland for stealing some pairs of shoes for his family.

Accounts differ somewhat in the sequence of events1,2. After walking without food for over a week, two returned to Macquarie Harbour where they died. Four of the others – Dalton, Greenhill, Mathers and Travers- decided to kill one of the others and eat him. Cornelius was the first to be murdered, while he slept, by Greenhill using an axe, and next was Dalton, then Bodenham. John Mathers was the next to be murdered, followed by Travis and finally Greenhill. Pearce was now alone and after he had finished eating Greenhill, he found a flock of sheep to eat, but then was caught by the police.

He was sent back to prison in van Diemen’s Land, and in 1824 escaped again with a Thomas Cox. When he was recaptured, he confessed to killing and eating Cox and was sentenced to death. He was hanged and his head was removed and can now be seen in a museum in Philadelphia.

10 thoughts on “My cannibal ancestors”