Further up the Vicdessos valley from the ice age paintings of Niaux ( https://mountainsrivers.com/2014/02/23/the-ice-age-paintings-of-the-grotte-de-niaux/)  is one of the less well known Cathar castles, known as Montréal de Sos. It sits on a rocky outcrop, the Vic de Sos, from which the valley gets its name. Occupied since the Bronze age, this was the site of an Iron Age oppidum, a Carolingian fortress, and during the Cathar period one of the most powerful castles of the Foix region, Montréal-de-Sos. Under the castle remains is a cave with two exits – or an entrance and a different exit. Such caves were used for initiation rituals in Cathar times.

The Vic de Sos, 2011. On top is Montréal de Sos, entrances to the Grail Cave below.

Sunrise over the ruins of the castle Montréal-de-Sos, 2011.

The highest of the snow-covered Pyrenees peaks, Pic d’Estats (3143 m) is not far away, hidden in the clouds the morning I was there. The visible peak in front of the clouds is Pic du Montcalm (3077 m). The Montréal-de-Sos fortress was dismantled by Richelieu, and during the past decade, the ruins have been extensively excavated by archaeologists. When I was there in 2011, there were extensive excavations underway in its ruins ofand two men carrying picks arrived at the top just as I was leaving.

Snow-capped peaks of the Pyrenees (3200 m) from Montréal de Sos.

In the cliff under Montréal de Sos is a double entrance “initiation” cave, both entrances shown in the photo below.

The entrance and exit of the Grail Cave

Looking out from the entrance of the Grail Cave. The Grail painting is on the wall to the right.

Just inside the entrance is a wall painting of Cathar origin dating to the 12th century was found in the cave in 1932. The painting shows various symbols of the Grail described in Chrétien de Troyes’s “Perceval, le Conte du Graal”, the oldest Grail romance (1190). The painting shows a lance, a broken sword, a solar disk, many red crosses and a square panel. The latter contains an inner square. The outer part of the panel, which might represent a table or altar, contains twenty crosses in various forms on a black background; the inner part contains five tear-shaped drops of blood and five white crosses. If the inner part corresponds to the tailléor, then the painting contains all four symbols of the Grail procession.

Detail of the sword in the painting, taken by me in 2011.

I had a small torch with me, and I explored further into the cave, which goes quite a way into the mountain. 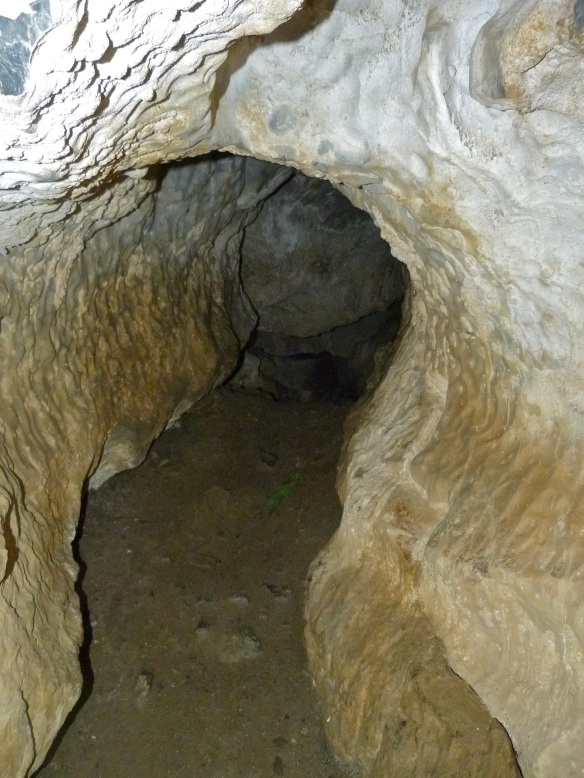 Deep within the Grail Cave – the passage is less than 1 metre high here.

After some considerable distance the passage becomes very low and tight, and I decided to turn back (not wanting to get jammed in a horizontal squeeze deep in the mountain when no-one knew I was there) without having found  the Sangréal.  Maybe I am not yet pure enough in spirit. Another time perhaps, another place perhaps.

It would be a horizontal squeeze beyond this point. No sign of the Grail so far.

The Grail cave faces a strange monolith in the distance known as the Dolmen of Sem, meaning the ‘Dolmen of Samson’. However, this stone only vaguely resembles a dolmen, and it is positioned so that it points directly at a nearby mountain range whose summit is called the Forest of the Grail, and whose valley is known as the Pass of the Grail. I went up to look more closely at the Dolmen de Sem, and as I climbed up to the knob on which it perched, the morning sun shone straight through underneath it.

Further down the Vicdessos Valley, not far from the prehistoric cave at Niaux, the castle of Miglos overlooks the valley and the Vicdessos village The square fortress includes a rectangular keep some 20 meters high. Various buildings join the keep to another tower, forming an inner courtyard. First mentioned in the mid-12th century, the castle was the seat of the barony of Miglos, subject to the counts of Foix. Miglos lost its military importance in the 14th century and became a residence, changing hands several times. The last owners were turned out during the French Revolution, leaving the place a ruin. 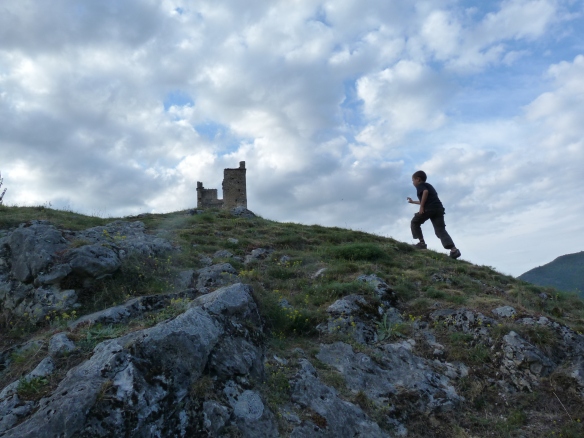 Climbing up to the Chateau de Miglos, 2011