One of my deep maternal ancestors, Una, probably lived in the Basque region or perhaps a little further north around 12,000 years ago, which would make her my great*780th grandmother (give or take a few generations). She may well have  been part of the Magdalenian culture in the foothills of the Pyrenees who produced the stunning cave paintings at sites such as Roc-de Sers, Lascaux, and Niaux. I have visited the Grotte de Niaux twice, once in 1992 and again in 2011. It is one of the few caves with Paleolithic paintings that can still be visited.

Niaux Cave is located in the northern foothills of the Pyrenees, just south of the French town of Foix. Niaux Cave is one of many in this region, and is one of Europe’s most impressive Palaeolithic rock art galleries of cave paintings. Its massive cave entrance is set high up in the mountainside above the Ariege River that runs through the Tarascon basin, characterised by its compact, steep-sided valleys. This topography creates a warmer micro-climate than that of the rolling landscape to the north, just as it would have at the end of the last great ice age, enticing and sheltering both animals and hunter-gatherers alike. 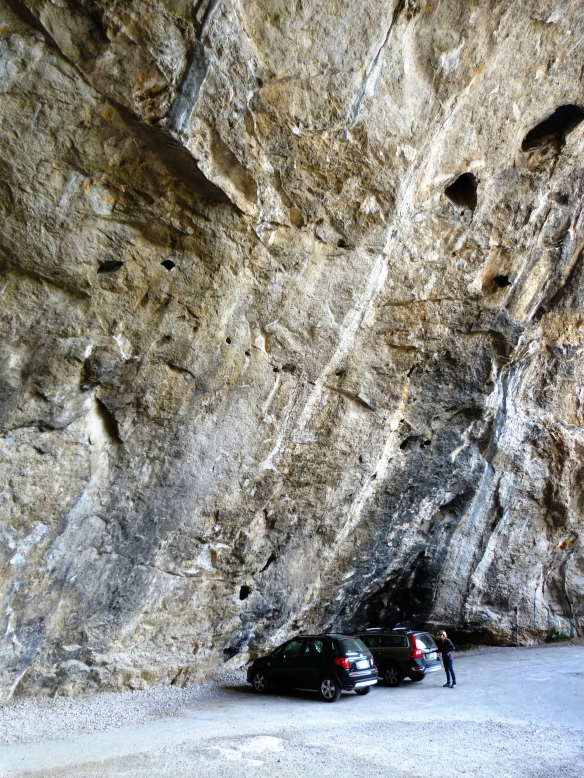 The entrance to the Grotte de Niaux, is in the Vicdessos valley, not far from Tarascon-sur-Ariège. The original entrance is a small hole in the hillside, but another entrance has been constructed with a short tunnel leading from a vast rock overhang into the cave proper. About one kilometre into the cave are prehistoric paintings around 14,000 years old (the Magdalenian period).

The new entrance to the Grotte de Niaux

The cave has been left in its natural state, and not lit up, to protect the paintings. Visits are strictly regulated and for the 2011 visit, we had booked well ahead (in 1992 I had come across the cave by chance and was lucky to be able to join a group). The guide provides torches for all the party, and our small group walked about one kilometer through a slippery and muddy underground river passage until we reached  the Salon Noir. 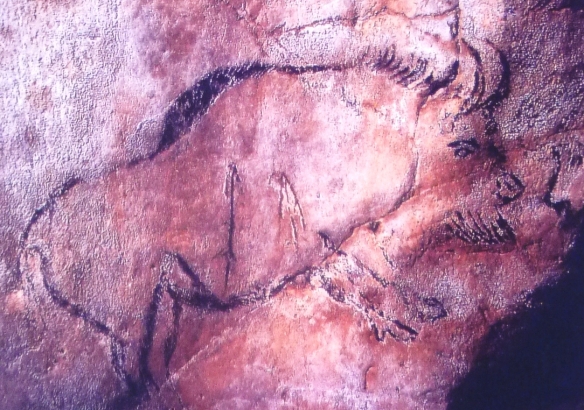 Painting of bison in the Salon Noir, Grotte de Niaux

The walls of the Salon Noir are covered with wonderful drawings and paintings of bison, horses and ibex. On both the occasions I have gone into the cave, when we reached these and turned our torches onto them, there were gasps of amazement from children and adults alike. Now, through radiocarbon dating of the charcoal, we know the rock art is at least 14,000 years old, possibly from the time of Una.

Early visitors to the cave left graffiti recording their names. The photo below shows that a Frenchman wrote his name deep inside the cave in 1686.  But it was not until 1906 that the significance of the drawings in the cave was realized.

Back into the sunlight after an extraordinary trip back 14,000 years to visit our ice age ancestors.