Genealogy is partly about the transfer of information embedded in our DNS. But what is the origin of DNA? The next step back takes us to the stars. Through extreme genealogy, we have come to understand our origins in the stars.

We are stardust and the stars are our ancestors, but I had not realized how intimate the connection was until recently when I read the book “The Stardust Revolution”.
In my university physics days, or even earlier, I learned that the origin and abundance of the elements in the universe and on earth are explained by the processes of stellar nucleosynthesis. Hydrogen and helium were created in the Big Bang as described by Alpher and Gamow in 1948 (Gamow invited Hans Bethe to join as an author in order to have a paper by “Alpher, Bethe, Gamow”. His student Alpher was not amused). In 1957, Fred Hoyle and colleagues published a paper “Synthesis of the elements in the stars”, 104 pages in length, which explained in complete detail how all the naturally occurring elements had been created, and correctly predicted their relative abundances. The paper described six different processes of stellar nucleosynthesis to account for the 90 naturally occurring elements from hydrogen from uranium. 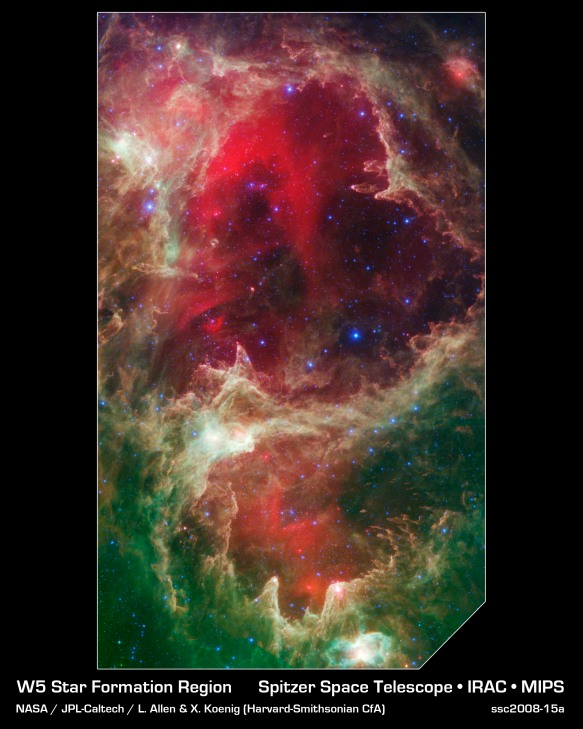 The W5 star formation region in the constellation Cassiopeia. The older stars are blue dots, the younger stars line the rims of the cavities and some can be seen at the tips of pillars of gas. The white knotty areas are where the youngest stars are forming.

As a large star exhausts its hydrogen, helium will start its nuclear burn, forming carbon and oxygen. Then in the core of massive stars, carbon and oxygen burn to form elements from neon to sulphur. In large stars that become red giants, a slow neutron capture process with beta decay forms all the atoms up to element 83, bismuth. In supernovae, a fast neutron capture process also produces these elements, but in seconds rather than tens of millennia. Supernovae have produced the bulk of the universe’s precious metals, silver, platinum and gold, and are responsible for the creation of the heaviest elements up to uranium.

What I have completely missed until recently, is the discovery that many molecules, simple and complex are also produced by stars in their cooler upper atmospheres and in the clouds of “dust” spewed out by stars. Hoyle and a colleague showed in 1962 that carbon expelled by stars made up an important component of interstellar dust clouds, primarily in the form of flakes of graphite (ie. Pencil lead), although it has more recently been discovered that some of the carbon forms micro-diamonds (Lucy in the sky with diamonds?) and specimens of very ancient stellar micro-diamonds have been found in meteorites.

Stars create dust and the interstellar dust clouds become the birthing places of new stars, and planets. But I leave the story of planets to another post. Interstellar dust clouds are approximately 75% hydrogen, 25% helium and 1% dust. And the dust includes graphite, silicates and aluminates, and smaller amounts of other more complex molecules. For example, Betelgeuse, the red giant at the shoulder of Orion, has pumped out about our sun’s mass in dust since the end of the last ice age, about 10,000 years ago. This is enough to create hundreds of earth sized planets.

Star Cluster NGC 2074 in the Large Magellanic Cloud is a firestorm of raw stellar creation, perhaps triggered by a nearby supernova explosion. The high-energy radiation blazing out from clusters of hot young stars already born in NGC 2074 is sculpting the wall of the nebula by slowly eroding it away.

During the 1950s, Charles Townes and others developed microwave spectroscopy, and he used this to identify interstellar ammonia and water, and a range other molecules. Townes had already won the Nobel Prize for his invention of the maser, the microwave forerunner of the laser. But his discovery of water drastically changed our view of the cosmos. Not a dry and dusty place, but dripping with water. Water is the third most common molecule in the universe, after molecular hydrogen and carbon monoxide. Over a region about 100,000 times the Earth-Sun distance, the Orion Nebula is producing enough water to fill the Earth’s oceans 60 times a day, or 21,000 times per year. For millennia. In 2008, a body of water around a massive black hole 11.1 billion light years away (or ago) was discovered by its microwave emissions. Spanning hundreds of light-years, it held 140 trillion times the water in the Earth’s oceans.

And of course the significance of water for our understanding of the evolution of life is that it is the universal solvent, life’s matrix. It’s the perfect place for something that was once thought only to take place on Earth: chemistry. And not just chemistry, organic chemistry.

Some of the most common molecules in interstellar space (molecular hydrogen, water, carbon monoxide, ammonia, formaldehyde, hydrogen cyanide, methane, ethyl alcohol, sodium chloride, various simple sugars) are exactly those needed to produce more complex aromatic hydrocarbons and other organic molecules. And in the last few decades, the spectroscopic signatures of many such molecules have been discovered. These include three of the four nucleobases that form the backbone of DNA, eight of the 20 amino acids that are found in us, as well as several other amino acids not found on Earth. So the big bang not only led to the evolution of stars and galaxies, and the creation of the elements all the way up to uranium, but cosmic chemistry stocked the universe with large carbon-based molecules including many of the precursor components of our genetic and protein molecules.

The implications for the evolution of life on planetary systems throughout the universe are profound. The ingredients and pathways for carbon-based life have a rich cosmic natural history, one that might play out similarly in many other places in the cosmos. And our knowledge of planetary formation and discovery of planets has also advanced far beyond my fossilised knowledge of cosmology. But I leave that story for another post.

Star factory in the Monkey Head Nebula. A cloud of gas and dust is sculped by ultraviolet light from young stars at the centre of the nebula.

Note: Photos courtesy of the Hubble and Spitzer Space Telescopes.