I have had a longstanding interest in megalithic monuments since I was a teenager. In part sparked by my interest in astronomy as a teenager, since the megalithic monuments of Europe show that Neolithic humans had sophisticated astronomical skills. And in part, by my interest in deep ancestry (see previous post https://mountainsrivers.com/2014/03/11/maternal-ancestors-bronze-age-iron-age-roman-britain/). And also by their connection with the barrowdowns of Middle Earth. On my first extended trip to Britain, I visited various megalithic stone circles in England and explored the barrows around the Ridgeway near Oxford.

So on my trip to Eastern Scotland last Easter, I took a look on the internet to see whether there were any megalithic monuments within an easy drive from the area I was staying in near the villages of Mathers (https://mountainsrivers.com/2014/05/20/the-villages-of-mathers-easter-2014/). And discovered there were three stone circles about 45 km north-west of St Cyrus where I was staying. I did not take any details of their location from the map I looked at, intending to figure out exactly how to get there another time. But as it turned out, I was heading in that direction the next day to Stonehaven, and decided I was close and should continue on. But all I could recall was that the stone circles were located in a wooded region not close to any major roads, and all I could visually recall was that they formed an approximate equilateral triangle with the villages of Strachan and Banchory. So I headed in that general direction, and somewhat at random took one of the minor roads that headed into that area. I drove slowly for about 10 km through woods and farmland, looking hard to see if I could spot any stone circles. I did not even know if any of the would be visible from the road, let alone if I was on the right road. And somehow or other, on a minor side road I spotted the stone circle Eslie the Greater in a field. 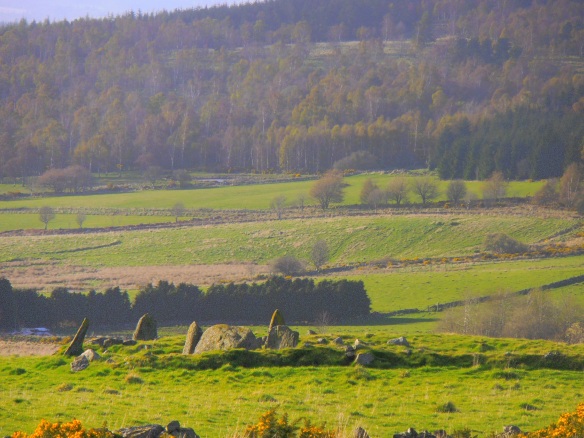 These stone circles are examples of “recumbent stone circles”, a type unique to the north-east of East of Scotland and date back around 4,000-6000 years. They are much smaller than the better known megalithic standing stone circles and are characterized by a largish recumbent stone which lies horizontally between two large `flankers’. Typically the stones which make up the circle were graded so that they decreased in size away from the recumbent. The recumbent stone is invariably placed south-west of the circle or in the southern arc of the ring.

The recumbent stone circle is Aberdeenshire’s unique contribution to the tradition of erecting rings of standing stones which was current in certain parts of Britain and Ireland during the third and second millennia BC. Over a hundred examples have been recorded, with diameters ranging from 18.2 m to 24.4 m. In fact, the three stone circles I was looking for, are fairly small and not at all well-known or visited by many. I was quite thrilled to have managed to find one of them by sheer chance, considering the likelihood I picked the right road and that the circle would be visible from the road. 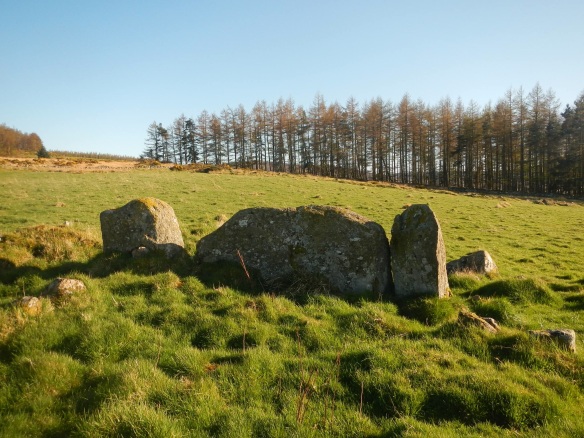 The recumbent stone and two flankers of Eslie the Greater.

The earliest Recumbent stone circles are believed to date from around 3,000 BC but they continued being constructed from the Neolithic to the Bronze age c.1,500 BC. Eslie the Greater and Eslie the Lesser are believed to have been constructed between 4,500 and 3,500 years before now. What may be the earliest primitive version of a recumbent Stone Circle was identified in 2013 in the shape of a 10,000 year old arc of wooden post holes mirroring the function of the recumbent and flankers. The location of the monument places it in the same region, as the largest concentration of recumbent stone circles, which all lie on a latitude which offers a narrow distance between the moons extreme setting points, such that they can be easily framed. Statistical analysis has shown that they have a clear association to prehistoric lunar observation. 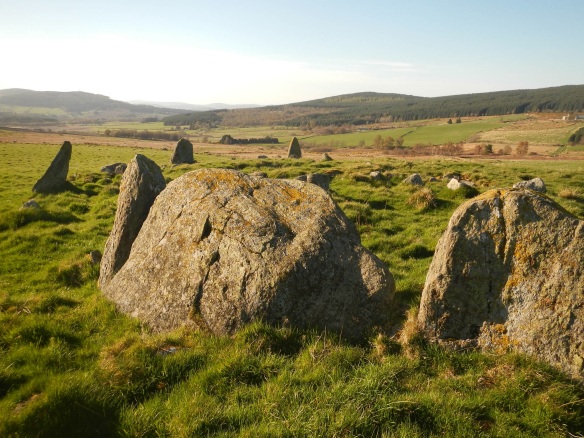 Research has shown that the orientation and the length of the recumbents suggests that they were meant as a ‘frame for viewing the rising and setting of the moon at certain times’. In Aberdeenshire, with a mean latitude of 57° 30’s, the moon at its maximum, will rise at 155° SSE, and set at 205° SSW. Of the 48 recumbents where it is possible to plot their axis, 45 have recumbent between these limits. The remaining were placed at 230°, 231° and 232°, the min moon setting (Aubrey Burl, The Stone Circles of Britain, Ireland and Brittany. Yale University Press, 2000). It is believed that the recumbent and flanking stones form a kind of false horizon or frame through which to view the rising or setting of the major standstill moon that occurs every 18.6 years. At that point, the moon dips towards the recumbent. On 12 of the stone circles, cup-shaped hollows 10 – 50 mm in diameter have been found, clustering at points (the recumbent, flankers or immediately adjacent stones) where the major standstill moon rises or sets. They provide one of the best pieces of evidence that Neolithic people were aware of the 18.6 year lunar cycle and observed it closely. 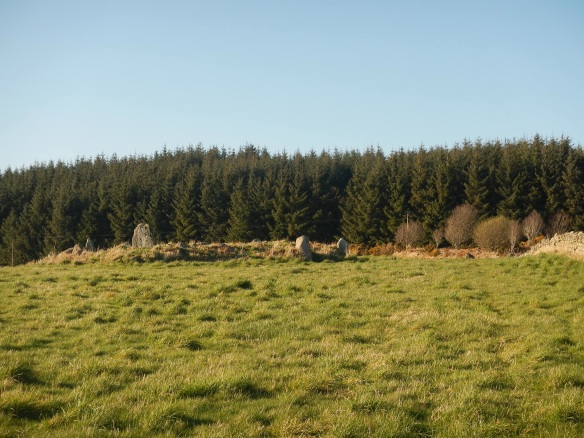 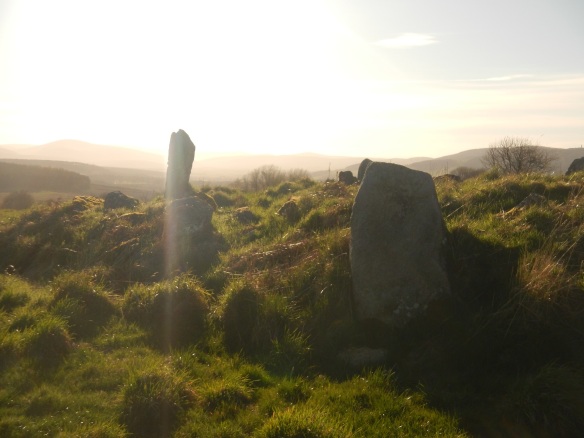 Standing stones of Eslie the Lessor

A little further along the minor road, I saw the second of the three stone circles, Eslie the Lesser, about 700 m to the north east of Eslie the Greater. It is quite a bit smaller than Eslie the Greater, and although sometimes listed as a recumbent stone circle, it is more likely to be an ordinary circle surrounding a ring cairn. The best known of the three, the Nine Stanes Stone Circle lies about 800 m south of Eslie the Lesser and is now within a forestry plantation known as Mulloch Wood. As a result, it took me some time to locate it, although I did find a sign naming it as Mulloch Stone Circle.

While the woodland setting of the Nine Stanes Circle is certainly not what its builders intended, it is a setting which contributes strongly to the remarkable atmosphere that surrounds it. It has partially been reclaimed by nature and many of the stones are heavily overgrown by lichen, and one of the uprights flanking the recumbent or horizontal stone has fallen down at some point in the past. Several generations after the circle was built, a low cairn was built inside the circle and it became a burial monument. It was excavated in 1904. Inside the cairn, they found a funnel shaped pit 2.5 m deep, full of cremated bone. 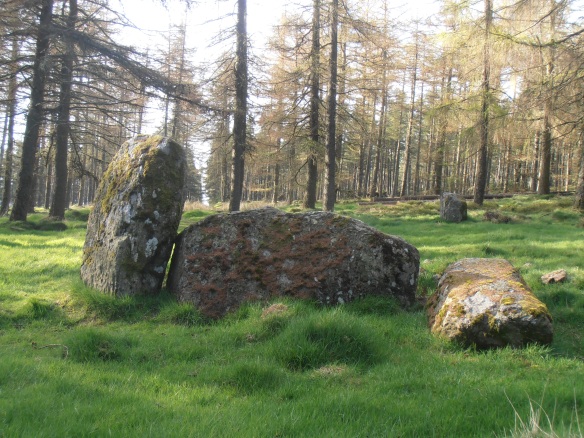