Our understanding of the evolution of us modern humans has changed dramatically in the last few years as ancient genomes are decoded and we discover that humans, Neanderthals and Denisovans interbred, and also in the remote past interbred with previously unknown “superarchaic” human groups.  Scientists are also discovering new species of extinct hominids, and no doubt will continue to shed further light on our origins. Just to try to sort out the big picture in my own mind and to put these various discoveries in context, I’ve tried to summarize what we think we know, or at least what the evidence available to date suggests. This will no doubt continue to change.

The evolution of mammals and the monkeys

Although the earliest true mammals evolved during the late Triassic period towards the end of the age of the dinosaurs, they remained small and relatively inconspicuous until around 65 Mya, the time of the disappearance of the dinosaurs. The first modern monkeys evolved in Africa or Asia around 35 Mya and around 23 Mya they split into two lines: the Old World Monkeys (which led to many species including baboons, macaques and colobus monkeys) and the Hominoids (which led to gibbons, orangutangs, apes and humans).

The split of gibbons and then gorillas from hominines

The split of the Hominoid superfamily (apes) into the Hylobatids (gibbons) and Hominids (great apes) families occurred in the early Miocene, roughly 20 to 16 million years ago. Recent research suggests that the last common ancestor of gibbons and apes — including humans — was much smaller than previously thought, about the size of a gibbon [1]. Mark Grabowski and co-authors compared body size data from modern primates, including humans, to those estimated from a wide range of fossil hominins and primates. They found that the common ancestor of apes and gibbons was likely small, probably weighing about 5.5 kg (12 pounds), which goes against previous suggestions of a chimpanzee-sized, chimpanzee-like ancestor. Our last common ancestor with the gibbons was very likely gibbon-like, a small and nimble tree-dweller.

The last common ancestor of the hominoids was likely a small tree-dwelling and gibbon-like primate.

Among living primates, humans are most closely related to bonobos and chimpanzees and gorillas. The following diagram shows evolution of the hominoid family and the dates at which the major hominoid genera split off from the lines that eventually became humans. The gibbons and then the orangutans were the first groups to split from the line leading to the hominins, including humans—followed by gorillas around 10 Mya, and, ultimately, by the chimpanzees (genus Pan).

With the sequencing of both the human and chimpanzee genome, as of 2012 estimates of the similarity between their DNA sequences range between 95% and 99%. By estimating the frequency of mutations and thus the time required for the number of divergent mutations to accumulate between two lineages, the approximate date for the split between lineages can be calculated.

The split between chimpanzees and humans

Model of the speciation of Hominini and Gorillini over the past 10 million years; the hybridization process within Hominini is indicated as ongoing during roughly 8 to 6 Mya. Credit Wikipedia.

Species close to the last common ancestor of gorillas, chimpanzees and humans may be represented by Nakalipithecus fossils for an ape species that lived in Kenya around 10 Mya  and Ouranopithecus found in Greece and dated to 9 — 8 Mya. 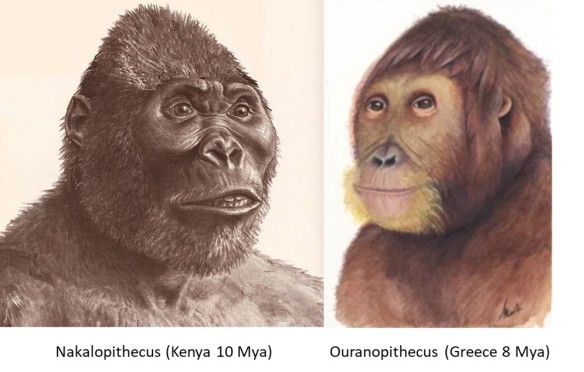 Human evolution began in Africa around 7 million years ago when a now extinct ancestral ape population split and gave rise to the chimpanzee and bonobo family trees, and the hominin or human family tree due to climatic and geological activity pertaining to the formation of the Great Rift Valley in East Africa. The word “human” encompasses many upright walking bipedal apes, not just Homo sapiens (which is the only member left on the hominin family tree). This means that “human” can apply to any species that evolved on the hominin family after the split from the now extinct common ape ancestor we shared with chimpanzees and bonobos around 7 million years ago in Africa.

The evidence suggests that there was a quite long-drawn-out speciation process rather than a clean split between two lineages. The above diagram shows the speciation process lasting from 8 Mya to 5.5 Mya and others have argued that it may have lasted up to 4 million years. Different chromosomes appear to have split at different times, possibly over as much as a 4 million year period. While it has been generally assumed that the last common ancestor of humans and chimpanzees was chimpanzee-like, Sayers et al [3] have argued that many of the behavioural and anatomical characteristics of humans may have evolved in the common ancestral species and that the characteristics of chimanzees evolved subsequent to the split. They also argue that the social and sexual behaviour of humans is closer to that of bonobos than chimpanzees, and that chimpanzee behaviours are what diverged most.

Following the split, the human branch evolved into many Australopithecine genera and species, and there is much debate and ongoing revision of the classification of Australopithecine fossil remains into separate species. Most of them lived in Africa, many at the same time, over the period from around 7 Mya to 1 Mya. As shown in the diagram above, there were many evolutionary offshoots that went extinct. There were many species that belonged to various genuses such as Sahelanthropus, Ardipithecus, Australopithecus, Paranthropus, Kenyanthropus, and our own genus, Homo. Most of the African fossils have been found within and near the Great Rift in east Africa, in countries such as Ethiopia, Kenya, and Tanzania. But others have also been discovered in countries such as Chad, South Africa, Zambia, and Morocco. 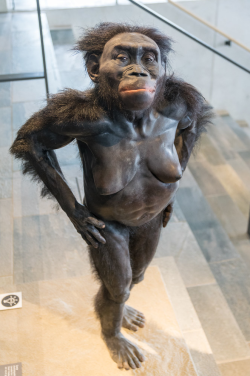 The genus Australopithecus evolved in eastern Africa around 4 million years ago before spreading throughout the continent and eventually becoming extinct 2 million years ago. There were a number of species, including Australopithecus afarensis. Fossilized bones of a female of this species were discovered in Ethiopia in 1974, dated to 3.2 Mya and became famous as “Lucy”. Lucy walked upright, weighed around 29 kg and 1.1 m tall, and looked somewhat like a chimpanzee. She is thought to be a young mature female around 12 years old. Lucy lived around the same time as the earliest known stone tools dating to around 3.3 to 3.4 million years old. These were discovered near Lake Turkana in Kenya and were likely made by Australopithecus afarensis.