Seeing Free Solo (mountainsrivers.com/free-solo-inspiring-and-disturbing/) reminded me of my “free solo” on Federation Peak years ago. Barely a rock climb, but the exposure was similar to that on El Cap. In Dec 1980- Jan1981, I did a three week traverse of the Eastern and Western Arthur Range in southern Tasmania with my then wife. One of our objectives was to climb Federation Peak (1,224 metres or 4,016 ft), whose spectacular summit rises like a spike in the middle of the Eastern Arthur Range (see photo below). 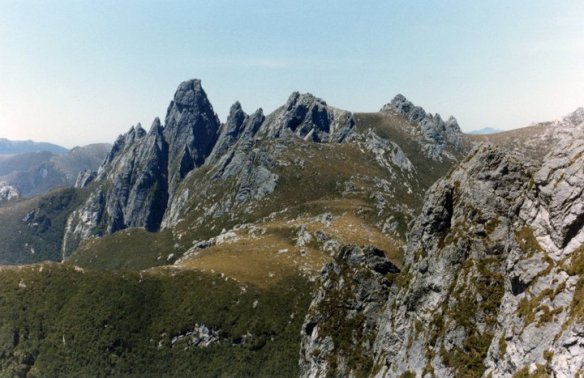 Looking towards Federation Peak from the Four Peaks.

Like most bushwalkers, we did the Southern Traverse on the far side of the mountain, then took the exposed Direct Ascent route to the top. My memory is that most of the Direct Ascent route is on moderately exposed ledges and sloping rock, fairly easy going, and then close to the top there is a somewhat tricky ramp (with limited handholds) that slopes upwards onto a final wall which is vertical but with fairly obvious holds. This wall is directly over Lake Geeves, 600 m below, and I could see it between my feet as I climbed it. It gives a sense of exposure unmatched by any other mountain that walkers can reach in Australia. 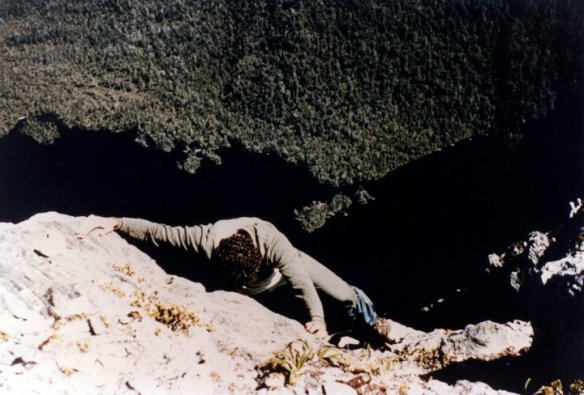 Me on the Direct Ascent to the summit of Federation Peak

The second photo (above) shows me on the last bit of the Direct Route, just below the summit. At this point, I had 600 m of air beneath my feet with Lake Geeves below. So though this barely counts as a rock climb (there are some much harder real rock climbing routes on the other faces), its my “peak experience” of free solo climbing. In fact, I did not find the climb up particularly difficult, probably because I didn’t look down, and the holds for hands and feet were reasonably good. Coming back down was a very different story. I spent some time on the summit before I could bring myself to down climb it. Psychologically, I found it quite difficult to swing myself over the edge with limited visibility of the footholds I needed to find, and 600m of air below me. But eventually we did it, as there was no alternative. I certainly can’t say that the fear centres of my brain were anywhere near as quiet as Alex Honnold’s.

One of my bushwalking friends has done a lot more walking in Tasmania than me, and has posted a video of the ascent of Federation Peak from a relatively recent trip on You Tube: https://www.youtube.com/watch?v=2IhmHUzeWAQ
He comments that for walkers who have done a lot of scrambling in the Blue Mountains near Sydney, it does not really represent a technical challenge, the major problems are psychological due to the extreme exposure.

Sir Edmund Hillary declared Federation Peak “Australia’s only real mountain”. A Tasmanian tourist web site claims that only around 100 bushwalkers reach the summit each year. I suspect that may be an underestimate, but even so, the site’s further claim that it is fewer than the number who summit Mount Everest each year (around 500), is probably roughly correct. Apart from the intimidating nature of the summit climb, it is several days walk to reach the peak through terrain that is about as difficult as bushwalking gets in Australia. (at least when I did it, possibly there have been tracks bashed through it now but I hope not). 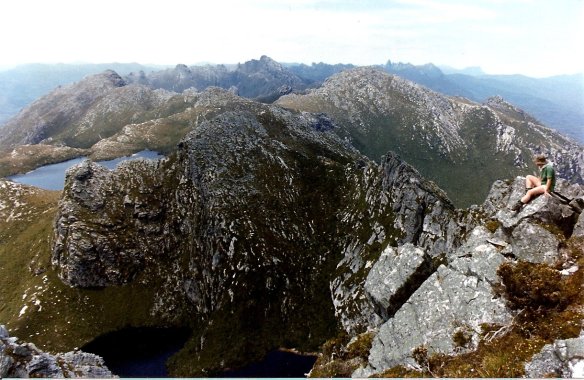 Looking east from Mt Sirius in the Western Arthurs towards Federation Peak (visible on the horizon to the right of centre). Traversing the Arthurs from east to west is a lengthy and challenging trip involving lots of scrambling and a little climbing, quite apart from the ascent of Federation Peak.

We had planned three weeks (or close to) to do the traverse of the Eastern and Western Arthurs. To avoid having to carry three weeks worth of food, I arranged for a plane to do an air drop of food about half way along. We packed non-perishable food into two large metal containers, carefully sealed and labelled. We arranged for them to be dropped on a flat open area of land in the valley below the transition point from the Eastern to Western Arthurs and I spent a day descending a ridge to find the canisters of food and return. When I got to the drop location, I found an area about the size of a football field covered in dense shrubbery about a metre high. I spent quite a few hours systematically searching the area without finding our food. I did find the mouldering remains of three other airdrops which clearly had not been found by other parties. I salvaged a tin of powdered milk and a jar of jam*. For the remaining week and a half, we walked and scrambled through the Western Arthurs and back to civilization on a ration of one tablespoon of powdered milk mixed with a small amount of jam per day. I came out of the trip almost 10 kilos lighter than when I started it.

My memory is a bit sketchy now, but I am fairly sure it was around a year later that someone fell to their death on the Direct Ascent, while on a trip with someone I knew. I took a look on the internet but could not find any mention of deaths earlier than the last 20 years,  in which there have been about 5 fatalities on Federation Peak. While some walkers do bring a rope and some gear, most climb it free, as we did. Apart from not wanting to carry the weight of gear for three weeks, there are not really a lot of good anchor points, and the time spent mucking around setting up belays may increase rather than decrease risk. For bushwalkers who are not also experienced rock climbers it remains probably the most challenging and iconic mountain in Australia.

*Our airdrop cannisters had dates on the outside, so if anyone found them later, they would know they could use them. The ones I found were so decayed, it was obvious they were quite old.