Skip to primary content
Continuing our glacial explorations (see also The-pyramids-of-euseigne), we visited a number of enormous glacial erratic blocks in the wooded slopes above the town of Monthey in the Rhone Valley. These blocks played a pivotal role in the realization that there had been great Ice Ages in the past. There are eight blocks along a trail about 5km long between Monthey and Collombey. ( MT_Blocs_Erratiques_Web.pdf). The first and largest of these blocks, “La Pierre des Marmettes”, is now in the middle of the parking lot of the Monthey Hospital. 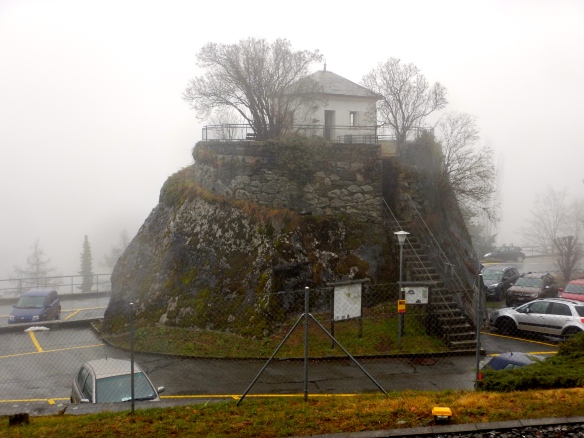 It is 19 m long, 10 m wide and 9 m high with a volume of 1800 cubic metres, and has a small building on top of it, constructed in the second half of the 19th century, together with steps to reach it. It was deposited here by the Rhone Glacier, around 18,000 years ago. I was standing on a railway track that runs past the hospital to take this photo. As a footnote, some years ago I caught a train that took this track to get to a ski resort. As I passed the hospital building, I was looking straight into a large window not very far from the train through which I could see an operation in progress and the insides of the patient who was being cut open.

Another view of La Pierre des Marmettes from the other side.

The second erratic “La Pierre à Dzo” is perched on three other granite boulders, the granite coming from the Mont Blanc Massif about 30 km away and quite different to the local limestone. In the 18th century, these erratics were believed to have been transported by the biblical Flood.
A local hunter Jean-Pierre Perraudin (1767-1858) became convinced that these erratics had been transported by glaciers in the past and in 1815 described his theory to Jean de Charpentier (1786-1855), a geologist who ran the local salt mine. This was also the period in which Scottish geologists Hutton and Lyell were realising the huge extent of geological time. 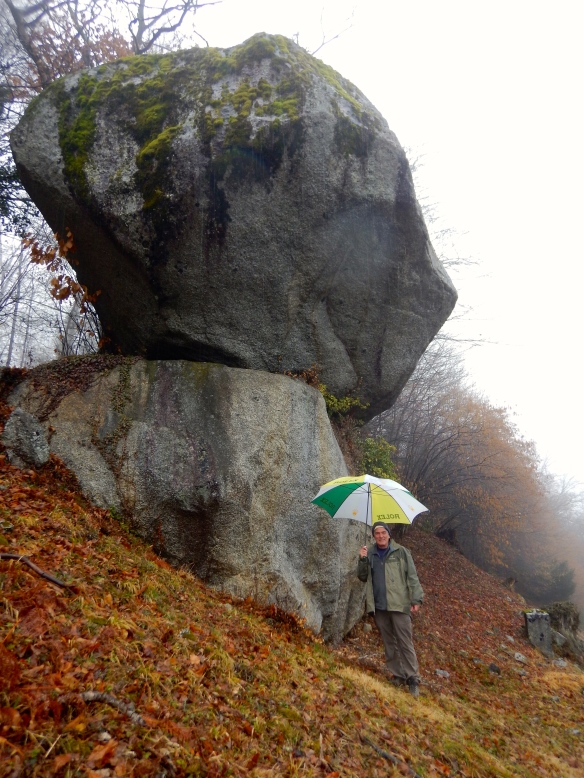 The above photo is from my first visit in January, when it was cold and raining. I also include below some more recent photos from a second visit in September, in sunny autumn weather.

The third erratic, La Pierre à Muguet is  the second largest at 25 metres long and 15 metres wide 7 metres high, 1000 cubic metres of volume and is also perched on underlying blocks.

Inscription on the boulder below La Pierre à Mugue mentions Perraudin and de Charpentier, who first recognized the glacial origin of these erratics.

Charpentier found additional evidence for the glacial theory, and used the locations of erratics to map the former extent of the Rhone Glacier during the last Ice Age. At its peak, 23,000 years ago, it extended about 20 km south of Geneva. There are two erratic blocks sticking out of the lake, just near the Mont Blanc bridge in the centre of town.

I found an 1842 review of Charpentier’s essay outlining his arguments that glaciers created the Rhone Valley and the formation of the erratics:

“M. de Charpentier mentions many blocks of granite from 40,000 to 100,000 cubic feet, and as an exception to the general rule, a b lock of limestone, the largest known, situate near Bex which contains 161,000 cubic feet. These blocks must have travelled a great distance, some of the 25 and even 60 leages, from the place of their origin”.   Essay on the Glacers and the Erratic Formation of the Basin of the Rhone. By Jean de Charpntier [Review]. The Edinburgh New Philosophical Journal, 1842. Volume 33, page 119.

We also went to the other side of the Rhone Valley to visit a giant’s kettle. A giant’s kettle, also known as either a giant’s cauldron, moulin pothole, or glacial pothole, is a typically large and cylindrical pothole drilled in solid rock underlying a glacier either by water descending down a deep moulin or by gravel rotating in the bed of subglacial meltwater stream. “La marmite glaciaire des Caillettes” was created by the Rhone Glacier 17,000 years ago during the last ice age and is 5 metres in diameter and 8 metres high.  It is nestled in a cliff above some farmland about a hundred metres above the current level of the Rhone River near Bex in the Valais. 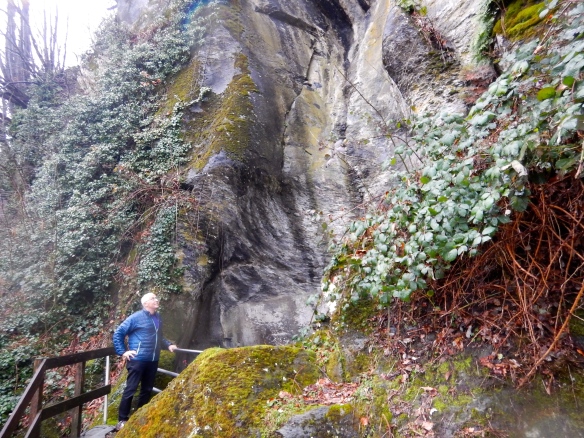 It was created by the subglacial meltwater stream under the glacier, then around 1200 to 1600 m of ice thick (4000 to 5000 feet). The pressurized meltwater, full of gravel, flowed over a cliff where a crack or fissure created a vortex in the water, drilling a hole into the bedrock. Although known and mentioned several centuries ago, until recently it was filled with boulders and rubble. During the 1960s, some local people got together and spent a year of weekends cleaning all the boulders and rubble out of it. Dynamite and hoisting gear had to be used to get some of the larger boulders out of the bottom.