After the day of reasonably heavy snow in Geneva last week, I decided to head up to Verbier to take advantage of the new snow. Verbier is a bit under two hours drive from Geneva and has spectacular scenery and skiing.  In the first few years I was in Geneva, Verbier was my regular ski destination, and for a couple of years I rented a small studio apartment there so I could go up for weekends and longer periods when possible.

From Lausanne onwards, the ground in the Rhone Valley was completely covered in snow, and the trees and mountains were all dusted with fresh powder. I parked in the valley below Verbier and caught the cable car up past Verbier to the mid-level pistes. 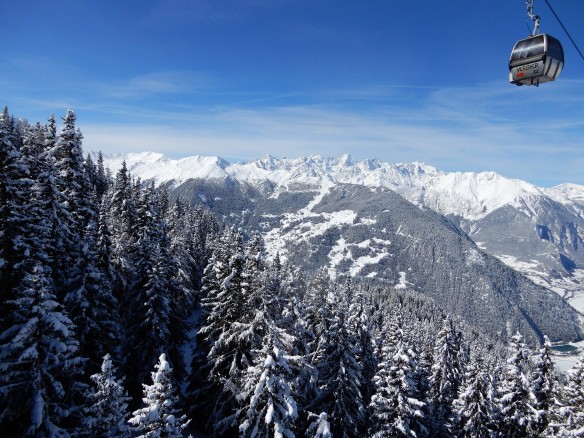 Heading up in the cable car

Verbier is part of the “Four Valleys” (“4 Vallées”) ski area, which is the biggest ski domain in Switzerland with extensive off-piste and back country routes.

After the first cable car, I caught a second to Attelas, a secondary peak at 2727 m. The above photo shows the view to the south towards one of Switzerland’s “4000m” peaks, the Grand Combin, which has four summits over 4000m, the highest at  4313 m. 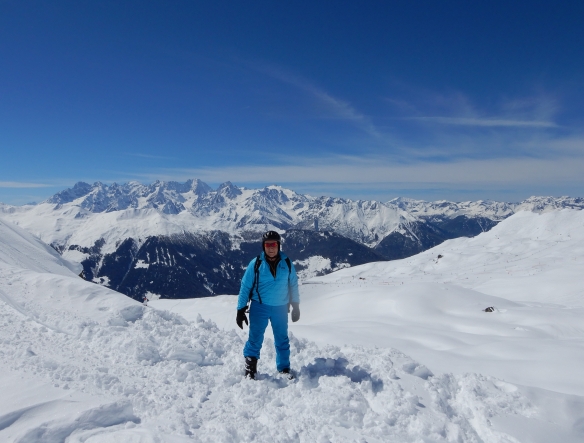 A photo of me

Mont Fort (3330 m) is the highest point in the Verbier ski area, 1800 m above Verbier village. The top station of the cable car is visible on the skyline towards the left in the photo below. It is clearly very windy on top, as the blown snow is clearly visible. 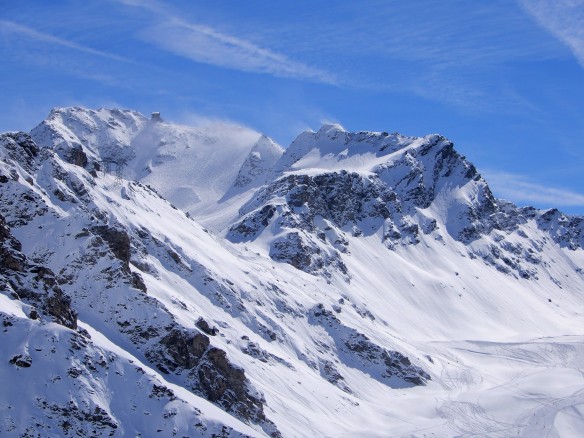 The summit panorama stretches from Mont Blanc to the Matterhorn and includes more than 50 four-thousand-metre peaks. Despite the wind, I had spectacular views from Mont Fort of the Swiss Alps (see photo below).The three pyramidal shaped peaks on the horizon to the right of centre are (from left to right) the Dent Blanche (4357 m), the Matterhorn (4478 m) and Dent d’Hérens (4171 m). 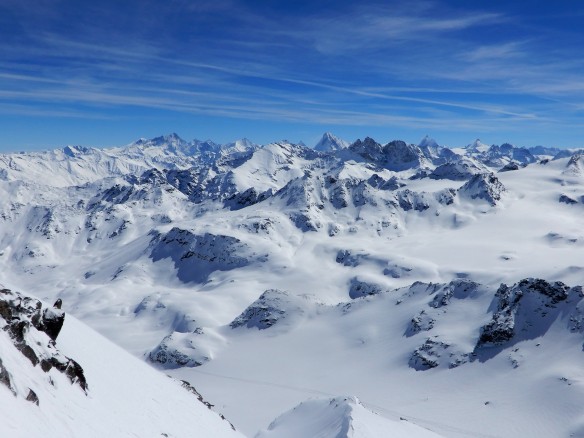 The view of the Swiss Alps from Mont Fort

For the photo below, I used the zoom telephoto to get a closer view of the Matterhorn (left) and Dent d’Hérens. 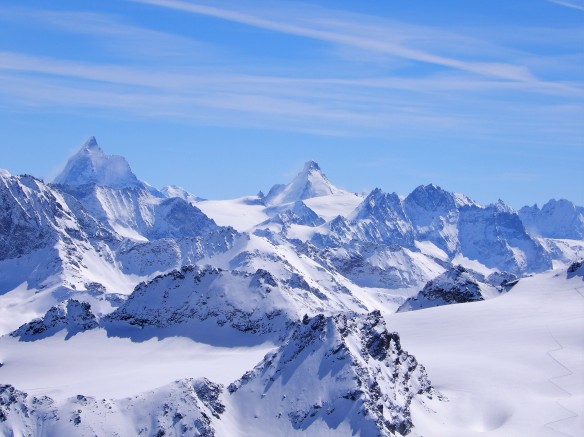 The ski route off Mont Fort is via the Mont Fort Glacier, and is around 1.7 km in length with a vertical drop of 350 m. It starts  with one of the steepest slopes in the Alps, reaching up to 40% slope.  It is marked in black, but that can be an understatement in icy conditions or poor weather. The route is marked to avoid crevasses, but is not groomed and tends to develop very large and quite often icy moguls, which call for good skiing skills. I have skied it several times (see skiing-mont-fort-near-verbier), sometime relatively gracefully, but once it was a total nightmare with large icy moguls that I had a lot of trouble dealing with, essentially falling from one to another.

As can be seen in the photo below, the strong wind was blowing the newly fallen powder snow so much that visibility was quite low. Because of the difficult conditions, I decided not to attempt it, but take the cable car back down to the Col de Gentianes at the base of the glacier. 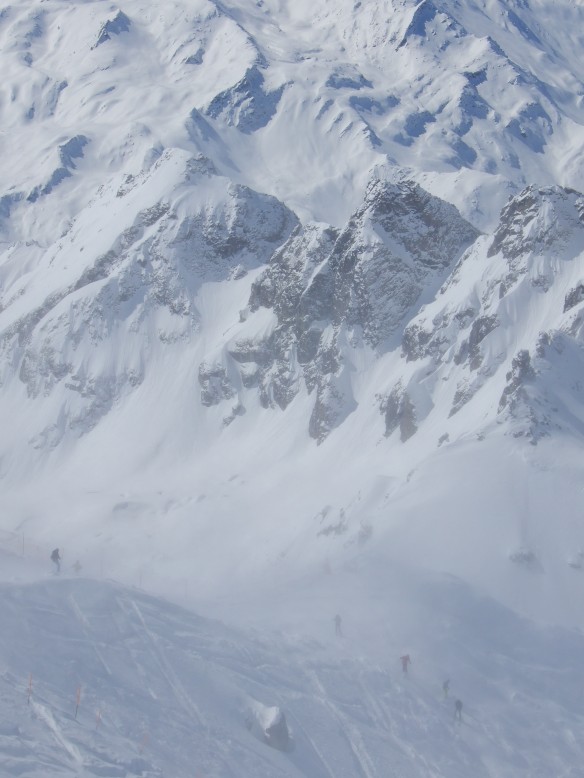 Behind where I am standing, there is another off-piste route down an extremely steep gully. I watched a lone skier traverse into the top of this gully and then disappear from view into the blown snow (see below). 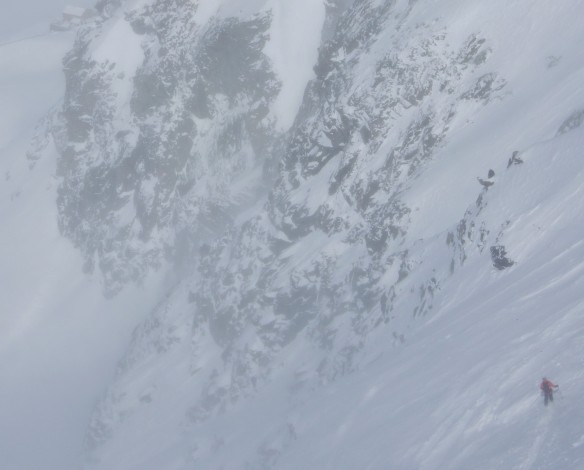 Once down to Col de Gentianes, I escaped from the wind and had lunch in the “igloo” at 2950 m before to continuing to head down, and eventually reaching Verbier village after another 1500 m of vertical descent. 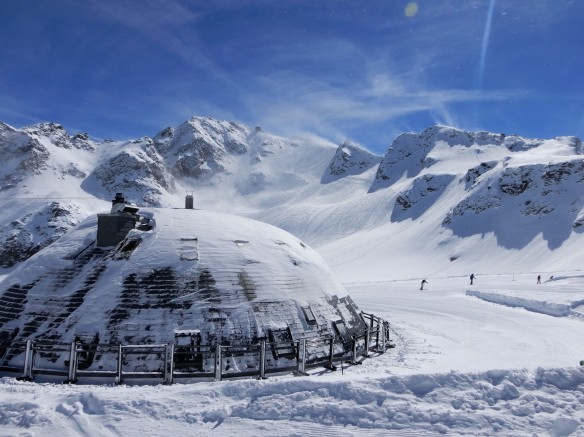 The “igloo” at Col de Gentianes 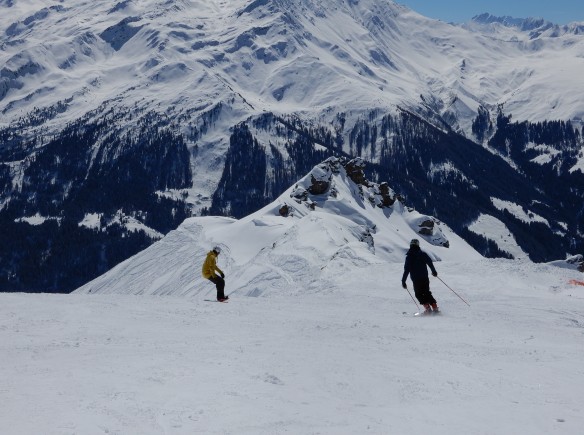 Heading down from Col de Gentianesfresh

Although I had been hoping to go off-piste, I largely stuck to the pistes as the fresh powder snow was on top of a layer of fairly hard and in places icy older snow, and the avalanche risk was posted as “elevated”.  All in all, a wonderful day in the Swiss Alps, even if I did forget the sunscreen and ended up with a slightly painful face.