My previous post examined trends in religious belief and irreligion (non-religious and atheism) over the last 40 years using data from the World Values Surveys (WVS) and European Values Study (EVS) [1-4]. There is considerable interest in the prevalence of atheism, particularly from Americans, and a variety of quite different statistics are quoted, and have been written about in various media. In this post, I present my estimates of global prevalence of atheism for the year 2020 and discuss the various other sources of international statistics and the definitional issues. But first, here is my global map based on data from the WVS/EVS (see here for details of analysis). 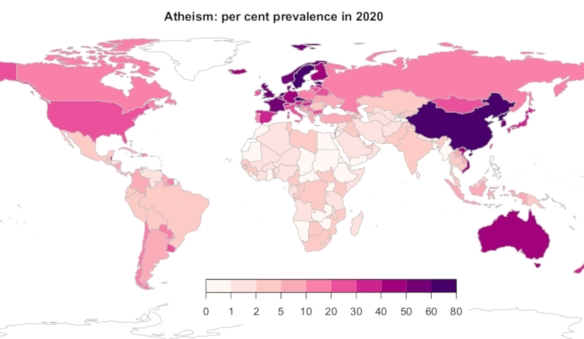 END_OF_DOCUMENT_TOKEN_TO_BE_REPLACED

Ronald Inglehart has recently published an article in Foreign Affairs called “Giving up on God: the global decline of religion” in which he uses data from the most recent wave of the World Health Surveys (WVS) to claim that between 2007 and 2019, the importance of religion has declined in most countries [1]. This is based on a single question on the importance of God in the respondent’s life on a 10-point scale. The average importance declined in 39 countries and increased in only 5.  Apart from the fact that this is based only on a single question on the importance of God, it also does not tell us how regional or global average ratings have changed. Depending on the relative populations and scale shifts in different countries, it could potentially even be consistent with a global average increase.

I’ve taken a closer look at trends in religious belief and practice using data from the World Values Survey and European Values Study [2-5] which have interviewed over 630,000 people in 110 countries in seven waves of the surveys over the period 1981 to 2020. These surveys include a direct question on whether you believe in God (Yes/No/Don’t know), but also “Are you a religious person” (Religious, Non-religious, Confirmed Atheist) and questions on frequency and type of religious practices, and on the importance in your life of religion and God. Of the 105 countries, 76 have data for years in range 2017-2020, and another 17 have data on or later than 2010.

END_OF_DOCUMENT_TOKEN_TO_BE_REPLACED

I’ve long been interested in the relationship between the stages of development of the individual (whether stages of moral development, psychological development, or consciousness) and the stages of development of human societies and civilizations. With the increasing prominence of fundamentalist religion in some regions of the world, the rise of science denialism and “post-truth” popularist politics, differences in human values are of huge importance and can literally become life and death matters for people. More generally, it seems fairly clear that people’s beliefs play a key role in economic development, the emergence and flourishing of democratic institutions, the rise of gender equality, and the extent to which societies have effective governments.

So I have taken an interest in results from the World Values Survey over the last two decades, and last month learnt that data from its most recent wave was being released in late July. There have now been seven waves of the World Values Survey (WVS), the first in 1980-1982 and the seventh underway since 2017. There have also been five waves of the European Values Study (EVS), which includes many of the same items as the WVS, and whose most recent wave covers the period 2017-2020. With the release of the WVS 7th wave data for 48 countries in July 2020, the WVS plus the EVS now include data for 117 countries or territories and over 638,000 respondents, covering the period 1981-2020.

Data from previous waves of the World Values Survey were used by political scientists Ronald Inglehart and Christian Welzel to identify two major dimensions of cross cultural variation across the world. They refer to these as Traditional values versus Secular-rational values and Survival values versus Emancipative values. Traditional values emphasize the importance of religion, parent-child ties, deference to authority and traditional family values in contrast to secular-rational values. Survival values place emphasis on economic and physical security. It is linked with a relatively ethnocentric outlook and low levels of trust and tolerance. Emancipative values are associated with gender equality, relative acceptance of divorce, abortion, and homosexuality and rising demands for participation in decision-making in economic and political life. Inglehart and Welzel used factor analysis to estimate where each country lies on these two dimensions are constructed what they called a “culture map”.

I set out to replicate this analysis with the full WVS+EVS dataset including the latest wave [1-4]. I decided to use a different statistical approach (item response theory) to estimate the two dimensions. I have posted a more technical summary on my professional website to give details of this analysis. In brief, I used structural equation modelling to estimate two latent variables. The survival-emancipative variable was derived from data for three questions of gender equality (jobs, politics, education) and three questions on acceptance of homosexuality, abortion, and divorce. The traditional-secular values variable was derived from data for three questions on sources of authority (nation pride, government, parents) and three questions on religion (importance, belief, practice. The values for countries with data for years 2005 or later were used to extrapolate values for year 2019. The following “culture map” shows the location of 105 countries based in these two variables. 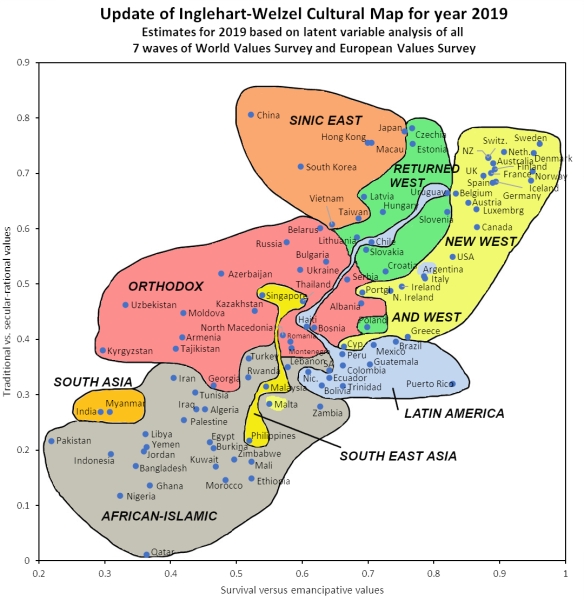 END_OF_DOCUMENT_TOKEN_TO_BE_REPLACED

Emptiness is a way.