Today, I took another look at the second wave of the Covid-19 pandemic using data on confirmed new cases per day. The first figure shows four countries where the second wave has peaked and is coming down. Australia is somewhat unique in that its second wave peaked considerably higher than the first. Croatia and likely Spain will join that club. 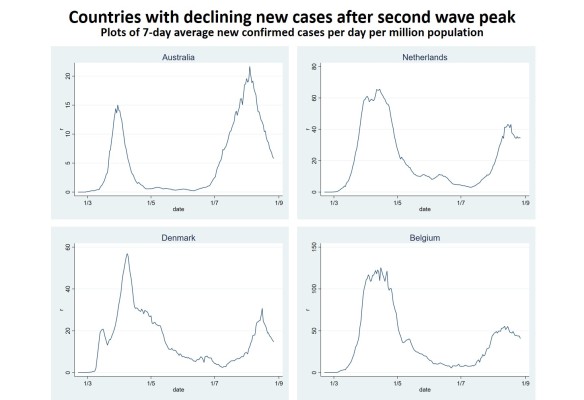 END_OF_DOCUMENT_TOKEN_TO_BE_REPLACED

Over the last two days, I’ve been assessing the coronavirus situation across the world. I’ve posted a regional analysis of trends in new cases on my professional site (an-out-of-control-pandemic-in-most-world-regions).

I reproduce a graph of regional trends below. The dramatic difference in trajectories for Western Europe and the Americas is obvious. While levels are lower in most developing regions, this is mostly due to much lower levels of testing. But confirmed new cases in all regions apart from Europe and East Asia and Pacific are rising. 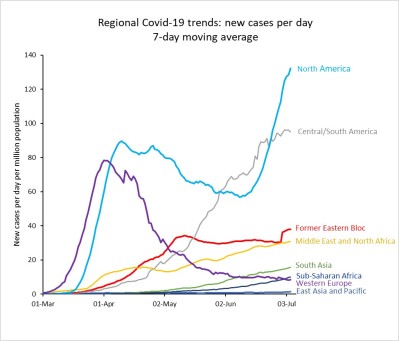 North America has the most out-of-control epidemic, and that is all due to the USA. I plotted trends for blue and red states in the USA. There is a dramatic difference, with most of the recent rise in new cases occurring in red states (that voted for Republican presidents in most of the recent presidential elections). In the week ending July 5, there were an average 226 new cases per 1 million population in red states compared to 88 per million in blue states.

In a second post which-countries-are-succeeding-and-not-succeeding, I have shown country-specific plots for selected examples of three groups of countries: (1) those that are beating Covid-19, (2) those that are nearly there, and  (3) those that need to take action.  The experiences of the first two groups of countries show that (a) it is important to act early, not wait till there a hundreds of deaths in the country, (b) it only takes about 5-7 weeks of strong interventions to get rid of the majority of cases and (c) half measures don’t work.

Tomorrow, Switzerland will relax its social distancing regime. Classroom teaching at primary and lower secondary schools will again be permitted. Shops, markets, museums, libraries, gyms and restaurants will be able to reopen under strict compliance with precautionary measures. Switzerland has had the 10th highest death rate per million people but has been one of the few high death rate countries to successfully control the epidemic. See the plot for Switzerland below.

END_OF_DOCUMENT_TOKEN_TO_BE_REPLACED

Its now one month since my earlier post on the coronavirus pandemic    A lot has changed since then. We have gone from 24,392 deaths globally on March 26 to 206,915 on April 26th. And recent analysis of total registered deaths by week in February and March, compared to the same periods in the previous year, suggest that the reported deaths (mostly hospital deaths) are only about 70% of the actual deaths. The proportion of deaths reported in developing countries without good death registration (including most of Africa, and much of Asia) will be even lower.

END_OF_DOCUMENT_TOKEN_TO_BE_REPLACED

Today Switzerland became the country with the highest rate of confirmed cases of corona virus per million population. Well, that is if you ignore some micro-populations such as the Vatican City, San Marino, Andorra and Faeroe Islands. Why?  It is landlocked with Italy, France and Germany around it. It did not close the border between Ticino and Italy for cross-border workers and many live in Italy were the virus spread rapidly. Also, it was the height of the ski season and alpine resorts were crowded with skiers from all over Europe, Britain and beyond. Here is a graph I did yesterday comparing confirmed cases per million population  for the thirty leading countries (excluding small countries with population less than one million. Data are from worldometers.com at 13.11 GMT on March 24. A this point Switzerland had not yet overtaken Italy.

END_OF_DOCUMENT_TOKEN_TO_BE_REPLACED

What started as a quest for happiness turned into a soul path to Light, Home, God. Here I document my journey.