In a previous post, I used an analysis of my Y chromosome DNA to trace the journey of my paternal ancestors from Y-chromosomal Adam, who lived in West Africa around 275,000 years ago (275 kya), to the founder of the R1b sub-haplogroup R-L23, who was born on the Caspian around 4,400 BC (6.4 kya). In this post, I continue my paternal ancestral journey to the most recently identified haplogroup founder: a Celtiberian living in what is now Portugal around 510 BCE. The sequence of Y SNPs defining my haplotree are shown in the following map. It summarizes this journey from R-L23 (4,400 BCE) to the most recent haplogroup founder (510 BCE), and continues on from the map published in the previous post. 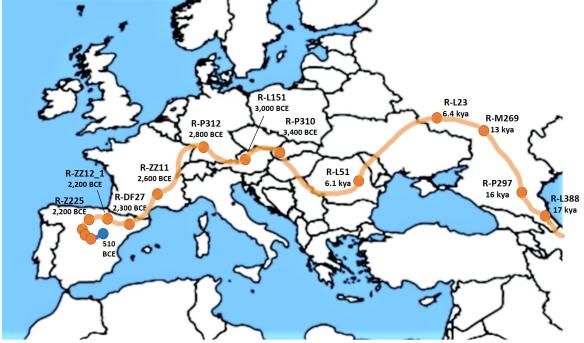 There is an immense amount of recent research on European Bronze Age genetics and migrations and a very considerable unfinished debate on how to interpret the evidence. New evidence is being published almost weekly, as increasing numbers of ancient European remains are analysed and Y haplogroup identified. So this post will only aim to describe the big picture as best I can summarize it, and details and perhaps even some of the big picture will likely change in the future.

END_OF_DOCUMENT_TOKEN_TO_BE_REPLACED

In earlier posts, I discussed how I have used an analysis of my Y chromosome DNA to identify my paternal ancestors all the way back to Y-chromosomal Adam, the most recent common ancestor of all men alive today. The following map summarizes my Y haplogroup ancestors from Y-chromosomal Adam down to those who left Africa around 70 thousand years ago (70 kya) and headed east through India and South East Asia and then up through China into ice age Siberia and then across to the Ukrainian steppeland north of the Black Sea.

I was originally going to continue this story all the way across Europe to the Iberian Peninsula and up to Ireland and Scotland, but I will keep that for a later post. I have discovered that there is an immense amount of recent research on European Bronze Age genetics and migrations and a very considerable unfinished debate on how to interpret the evidence. So it may take me a little while to come to grips with it. (A follow-up post is now available at my-paternal-ancestors-european-journey-the-caspian-steppes-to-celtiberia)

END_OF_DOCUMENT_TOKEN_TO_BE_REPLACED

When I first got interested in genetic genealogy around 2010, I had my DNA tested by the National Genographic Project, funded by the National Geographic to collect over a million DNA samples to map the patterns of human migration across the world. This project measured mutations known as short tandem repeats (STRs) at 12 sites, and gave a statistical prediction of my Y-haplogroup, R1b (M343) and subclade R-M269. A year later I upgraded my Y-DNA analysis to 44 STRs with Ancestry.com. At the time, I decided that I would wait for the technology to improve and the cost to drop and do a more comprehensive test which would definitively determine my Y haplogroup.

And so last year I did the Big Y-700 test with FamilyTreeDNA which examines 700 short tandem repeats, and over 200,000 single-nucleotide polymorphisms(SNPs) identifying known haplogroups as well as millions of locations where there may be new branch markers on the Y chromosome. This company claims to have the world’s largest genealogical YDNA database with over 2 million people included.