A week ago I posted on climate change and Australian politics (Climate change) and included a graph of the Keeling curve showing the increase in atmospheric carbon dioxide concentration. I was a week too early, as the Mauna Loa Observatory in Hawaii has just released its latest results showing that atmospheric carbon dioxide concentration hit 415 ppm on June 3rd (two days ago). This is the second highest annual rise in the past six decades.

May is the most significant month for global carbon dioxide concentrations because it is the peak value for the year, before the growth of vegetation in the northern hemisphere starts to absorb the gas from the air. The seasonal peak and fall can be seen in the Keeling curve, named after Charles Keeling, who started the observations on Mauna Loa in 1958 because of its isolation in the Pacific Ocean.

As recently as the 1990s, the average annual growth rate was about 1.5ppm, but in the past decade that has accelerated to 2.2ppm, and is now even higher. This brings the threshold of 450ppm closer sooner than had been anticipated. Concentrations of the gas have increased every year, reflecting our burning of fossil fuels.

Scientists have warned for more than a decade that concentrations of more than 450ppm risk triggering extreme weather events and temperature rises as high as 2C, beyond which the effects of global heating are likely to become catastrophic and essentially irreversible on a human time scale. 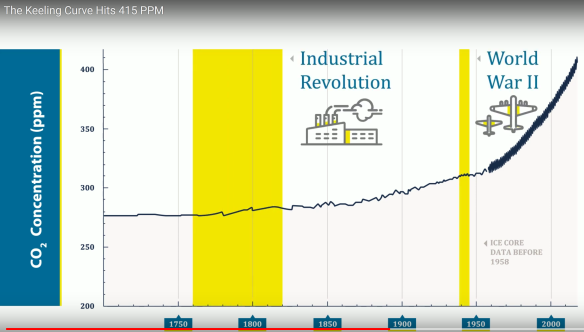 The video then zooms out to show the Keeling curve for the last 800,000 years putting the accelerating rise in atmospheric carbon dioxide this century in stark perspective. For the evidence linking carbon dioxide rise to global warming refer to my previous post.

Australia recently held a Federal election in which all the opinion polls for months had shown that the Labor Party was going to win by 52% to 48% and the Liberal National Party (LNP – the coalition of conservative parties in Australia) would lose government. Over the last 6 years, the LNP government has abandoned the country’s policy for cutting greenhouse-gas emissions, and effectively dropped its commitment to the 2015 Paris climate agreement (although it is pretending it will still meet the emissions-reduction target by use of misleading statistics).  The urgency of addressing climate change became a major issue, particularly for younger people, in the recent election campaign, and The Labor party ran with a much stronger set of policies to address climate change in the recent election campaign, and this issue was a principal issue for many urban and younger voters.

The Labor party also ran with a very detailed list of policies including getting rid of some tax breaks which predominantly favoured relatively rich investors, and some tax policies on ownership of second houses which had the impact of raising house prices to the disadvantage of first house buyers. The LPNP ran scare campaigns about Labor taxes (that were largely false) and together with the concern of working class voters particularly in rural areas where coal and other mining were important, this resulted in the loss for Labor.

END_OF_DOCUMENT_TOKEN_TO_BE_REPLACED

a topsy-turvy life of quietude