Last week, Freedom House released its 2020 annual report on global freedom. The report documents trends in every region of the world of declining political and civil freedom: “In every region of the world, democracy is under attack by populist leaders and groups that reject pluralism and demand unchecked power to advance the particular interests of their supporters, usually at the expense of minorities and other perceived foes.”

The report compiles a freedom index for countries based on an average of two indices for political rights and civil liberties, composed of numerical ratings and descriptive texts for each country. The 2020 index adds to a time series for countries that extends back to 1972.  I’m interested to see to what extent the time series upholds the view of Stephen Pinker that there has been sustained long-term improvement in both political rights and human rights globally and this will continue (Enlightenment Now, Chapters 13 and 14).

The graph below shows time trends for the number of countries falling into three broad categories of the freedom index, labelled as Free (green shades), Partly free (orange shades) and Not free (purple shades). The graph includes 185 countries. 11 very small countries with populations less than 90,000 in 2015 are not included. 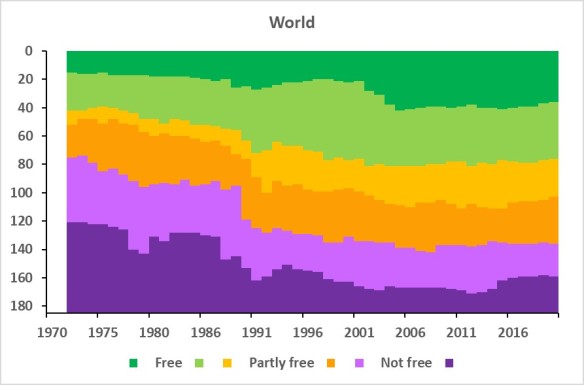 Trends in numbers of countries by broad freedom category