Media across the world have been publishing articles and photos on the catastrophic bushfires in Australia. Richard Flanagan, a well-known Australian author, published an opinion piece in the New York Times two days ago, which fairly accurately summarized the impact of the fires and the complete inadequacy of the government and political response (Australia Is Committing Climate Suicide).

Mogo, a town on the NSW south coast has been devastated by bushfires. One Mogo resident watched his 92 year old father’s house burning next door. At the time of taking this photo, he wasn’t sure where his father was. Credit: James Brickwood

Here are some quotes from the article:

“Australia today is ground zero for the climate catastrophe. Its glorious Great Barrier Reef is dying, its world-heritage rain forests are burning, its giant kelp forests have largely vanished, numerous towns have run out of water or are about to, and now the vast continent is burning on a scale never before seen.       …….

“The fires have already burned about 14.5 million acres — an area almost as large as West Virginia, more than triple the area destroyed by the 2018 fires in California and six times the size of the 2019 fires in Amazonia. Canberra’s air on New Year’s Day was the most polluted in the world partly because of a plume of fire smoke as wide as Europe.

“Scientists estimate that close to half a billion native animals have been killed and fear that some species of animals and plants may have been wiped out completely. Surviving animals are abandoning their young in what is described as mass “starvation events.” At least 18 people are dead and grave fears are held about many more. …..” 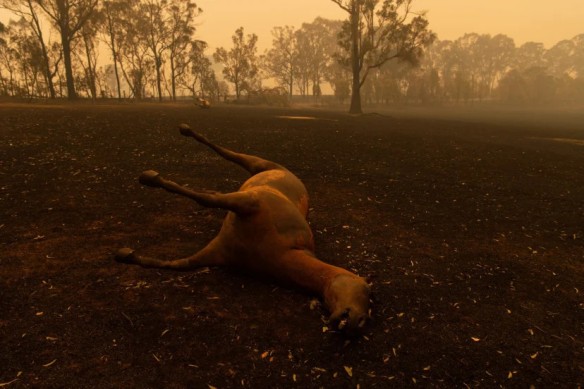 A deceased horse on a property on the outskirts of Cobargo, a town on the NSW south coast that was devastated by bushfires at New Year. Credit: James Brickwood

END_OF_DOCUMENT_TOKEN_TO_BE_REPLACED

Practical tips on how to be happier, now