My first encounter with Middle Earth was when I came across The Hobbit in my first year of high school. The Hobbit gave me the same sense of the numinous and of “Northerness” as earlier had C.S. Lewis’s Chronicles of Narnia. I had borrowed it from the local library, did not remember the name of the author and only several years later as a teenager did I discover the Lord of the Rings (LOTR).  It was originally published in three volumes in 1954 and 1955, 18 years after the Hobbit was published in 1937. The Lord of the Rings became immensely popular in the 1960s with the publication of the Ballantine paperback editions, and in North America, the publication of the Ace pirated edition.  I first read it in 1969, when I purchased the 1968 first edition of the George Allen and Unwin one volume paperback with cover illustrations by Pauline Baynes: 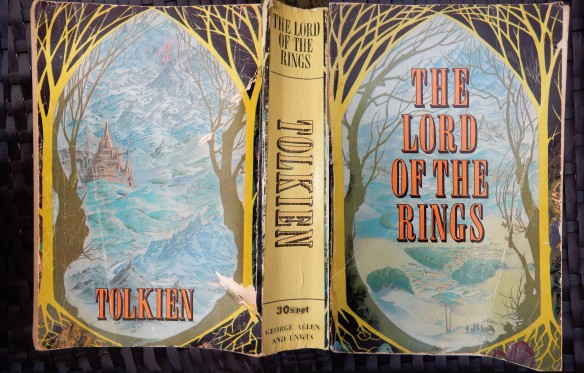 END_OF_DOCUMENT_TOKEN_TO_BE_REPLACED

Follow Mountains and rivers on WordPress.com
Join 145 other followers